American painting making sense of trauma, is unnervingly topical right now. However, the country’s art industry has re-evaluated itself in the face of extreme circumstances, more than once. The work of American artists is central to the country’s identity. Given the country’s young age, American art is consistently new and entwined with the cultural fabric of the USA. The Wall Street crash in 1929, was devastating for American society. It dealt such a blow that the very aesthetics of American art reflected the social unrest in the period after. The Royal Academy’s ‘America After the fall: Painting in the 1930s’, beginning February 25th, examines this with 45 unmissable masterpieces. One to look out especially for, is the iconic ‘American Gothic’ by Grant Wood. The painting will be taken for the first time, from its usual home in North America and brought across the pond to London at the Royal Academy. This is the painting that we’ve all seen on paper, yet most of us, never in person. Edward Hopper’s paintings, that burst with a silence that is both loud and isolating, will also be present. (One could say the entire aesthetics of Madmen was modelled on Edward Hopper’s lonely cityscapes.)

Charles Sheeler’s modern industrial landscapes will also be there. Gorgeous paintings from Georgia O’Keefe, that both defied tradition and greatly influenced modernism will be on show. It isn’t every day that you have the real American masters, all in one place and in London. Work from the brilliant Jackson Pollock, Alice Neel, and Thomas Hart Benton will all feature too. Despite the circumstances, the Art that came out of the 1930s, was not always prophesizing doom and gloom. Adrian Locke, senior curator of the exhibition has stated much of the work examines the ‘manner in which America starts to re-organise, re-group if you like’. The exhibition shows painting as a medium in helping America adapt, heal and ‘re-paint’ itself to move past and make sense of the new social and cultural situation after the crash.

Today American painting is still doing the same. Gee Vaucher’s painting ‘Oh, America’, created in 1989, re-surfaced as the Daily Mirror’s front cover, after Trump’s win in the election. There’s much anticipation as to what the creative industry will look like in America after Donald Trump and his political agenda. Will it reflect the shock? Will the work be politically involved, serious, or take on a more humorous approach to a dire situation? The painting became a defining image in the aftermath of the election and illustrates the power of image to capture cultural and societal upheavals. Next month, the exhibition at the Royal Academy will not only be historically important, but an opportunity to see some of the greatest modern art to come out of America.

If American culture is your thing, then there’s more to be found this month. ‘Lucky Boy’ by Shanthi Sekaran, published January 2017, is a novel based on one boy, loved by two mothers. The novel takes an unflinching look at motherly love, American identity and the immigration experience within America. Sekaran’s novel in the short time since it’s publication, has received wonderful praise from the literary world as well as spark conversation on the treatment of immigration in the US. For those, that appreciate beautiful prose reading this novel will be a treat, while simultaneously gaining a compassionate insight into a theme that is very much in the public eye at the moment. 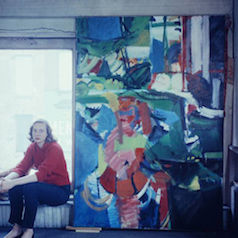