Dan Hillier’s work entrances art collectors, theatre audiences and even music fans around the world. It is shown on numerous posters and billboards across London at the moment as his exquisite and unmistakable imagery has defined groundbreaking productions at Shakespeare’s Globe in 2017.
This November, Hillier opened a solo show at the Saatchi Gallery which features his signature enigmatic hybrid figures with a modern, surreal twist. The exhibition explores imagination and devotional imagery and asks how visual icons might evoke intensity of wonder and emotion today.

Furthermore, there is also a show at Saatchi, called “Ceremony”, which adds new works to Hillier’s iconic images and explores themes of visionary experience. It references his interest and exploration of universal iconography, plant medicine ceremonies and uncharted territory. One of the works in “Ceremony” includes “Ellipsis”, a vision of modern ecstasy. Another is “Colibri”, an effigy with a huge halo of black and white feathers. “Ceremony” runs until the 3th of January 2017 at Prints & Originals Gallery of Saatchi Gallery. Dan Hillier has had exhibitions at the Institute of Contemporary Arts, the MuTate Britain, and the Les Musées des Arts Décoritifs at the Louvre in a collaboration with Marc Jacobs for Louis Vuitton and he has also had a solo show at the Natural History Museum in Turin. His aesthetics are made with engravings, botanical and anatomical prints and he combines old master techniques with modern technology. 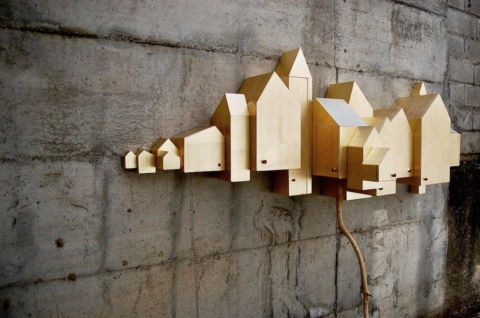