A look at the vast array of technologies entering the built environment evokes both utopia and dystopia – but will they ever escape the realms of uncertain possibilities?

Back in 2009, Shamus Young created Pixel City – a procedurally generated city. Along the same lines as parametric design discussed in Towards a Paperless Architecture, Young’s code worked by setting out base parameters for his digital city and letting the computer dynamically generate the rest uniquely whenever the program ran. While Young’s program can certainly create a realistic looking 3D city for use in a film or video game, what are the implications of this auto-generated city on real urban design? How computer generated could our world become?

Theoretically, using methods similar to Young’s we could set out base parameters for a city and have a computer build it. While Pixel City selects from a stock set of building forms and types such as ‘classical’ and ‘modern’, the parameters could become vastly more complex. One could specify distances of, for example, schools to houses and hospitals, road widths, lighting and waste management in pursuit of true ideal urban design. Patrik Schumacher, a parter at Zaha Hadid Architects, would have us believe that the only way for the cities of the future to survive is if they become truly parametric, a reflection of the countless causes and effects throughout our urban spaces.

Although ambitious and thought provoking, it is unlikely we will see this parametric utopia any time soon. What we are seeing, however, is the digital permeating our urban environment in more sinister ways. A scan of The House of Detention, the basement of a disused prison in Clerkenwell, London. Source: ScanLAB Projects

ScanLAB Projects specialise in the 3D scanning of large scale buildings, landscapes and objects with millimetre precision. This technology has the capability to ‘freeze’ a scene in the interior of a building, or even give an interior view of completely inaccessible areas. This works using point clouds – points in 3D space that capture colour and location data, each one helping guid an entire picture of the scanned area. The results are truly fascinating, and the implications extraordinary, from allowing a new level of super-accurate site analysis and interaction for architects, to providing forensic information for police forces. A computer generated impression of a Contour Crafted house under construction, the gantry above outputting layers of concrete like material. Source: contourcrafting

Another technology that has been in development for many years is 3D printing on a scale large enough to print an entire house. One of these techniques, known as ‘Contour Crafting’, proposes to print an entire house layer by layer in a way which is far safer, cheaper and faster than conventional methods. There will perhaps come a time where you can simply download a house you like from the internet and program a machine to print it for you. Why stop there? British practice Foster + Parners has teamed up with the European Space Agency to explore 3D printed moon bases. Can a system as complex as a city with its innumerable interactions truly be distilled down to a set of parameters for a computer? I doubt it. But the power of these technologies demands close consideration rather than jumping straight to the conclusion that our cities must become fully digital or perish. The social and economic benefits alone could be profound, but unless they are fully embraced these technologies will remain isolated objects of fascination. 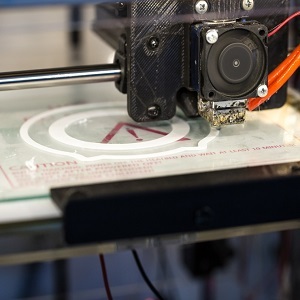