Sometimes, our most treasured possessions are not the most extravagant. Sometimes, the things we love most are dented and scratched, stained with familiarity and the scent of home.

This is the feeling captured by Sylvia, a 2018 short film written and directed by Richard Prendergast. Sylvia follows a woman named Sabrina, her two children, and their grandmother as they drive their beloved car, called Sylvia, across an empty landscape on the way to an unknown destination. Only upon their arrival does their story become clear, and the reality is heartbreaking.

The film is inspired by true events. Kevin Duke, who had just purchased a used vehicle in Kentucky, USA, found a letter from its previous owner in the glove compartment. Touched by the letter’s heartfelt contents, he wrote a Facebook post in an attempt to find its author. Social media connected Kevin with Sabrina, who had written that Kevin’s new vehicle wasn’t just a car. As Prendergast shows us in his poignant film, Sylvia is so much more than that.

Sylvia is Prendergast’s first narrative film, and it has done exceptionally well. After receiving a slew of awards at film festivals, including accolades for best short film, best actress, and promising director, its acceptance into the Manhattan Film Festival qualifies it for Oscar consideration in 2020.

.Cent Magazine had the opportunity to speak to Richard Prendergast about the making and the meaning of Sylvia. See his interview below.

Sylvia is based on a true story. How did you come across this story, and what inspired you to turn it into a film?

Prendergast: For the past 5 years, my wife (Rachel) and I have run our production company, SubMotion. We mostly produce branded content and advertising, but had discussed our desire to break into the scripted narrative world. Back in 2017, after a few months of looking around for ideas on which we could base a script for a short film, I stumbled upon Sabrina and Kevin’s story. I remember reading it for the first time and just thinking to myself, this is it, this is the film I want to make. It ticked all the right boxes. It’s an authentic story with a clear arc and was achievable on a relatively small budget. Being a true story that had been shared thousands of times also demonstrated that audiences cared about Sabrina’s story. In addition, being a father of two daughters (both of which are in the film), the details within Sabrina’s letter connected with me on an emotional level, which certainly helped when it came to directing and editing the film.

You are credited on this film as both the writer and the director. How do you think that your filling both of these roles helped to make a better film?

Prendergast: This is the first scripted narrative film I’ve written or directed. I wouldn’t describe myself as a writer but I knew that I wanted to create a project where I didn’t have to compromise with anyone else, so writing it became a necessity. Luckily you don’t have to be a technically gifted writer in order to craft a screenplay. You just need to be able to see and hear characters in your head and then write down what they’re doing. I think writing it helped me to understand the pacing of the scenes, camera angles and visualise what characters would do and say on screen. The whole process felt very fluid and by the time we got to shooting, I knew exactly what we needed for each shot.

The style of cinematography is very realistic. Could you tell us about the decision to film this way?

Prendergast: Coming from a cinematography background and specifically documentary, I guess I gravitate to realistic imagery. Given the budget restraints, we didn’t have the money to give it a glossy feel and being a true story, I always felt that the audience should be watching something that felt real. If we’d have been too stylistic with the cinematography, I think the gravitas of the true story could have been compromised.

Many of the shots in the film focus on objects, especially objects belonging to the children: a stuffed animal, a Viewmaster, a ballerina spinning on a music box. What do these objects convey for you as a filmmaker?

Prendergast: Have you ever gone into the attic of your childhood home and stumbled upon an old toy or game and instantly been transported back in time to the last time you played with it? A few years back I was rooting around in the loft of my parents’ house, searching for some old Hi8 tapes and saw our old toy box. There was something a little bit surreal about pulling out toys that had sat dormant for the past 20 years. The textures and colours sparked the memories of mine and my brother’s childhood. Sabrina’s letter to the new car owner was of a similar vein. Each mark and graze on that car meant something. A memory that she longed to hold onto but ultimately had to let go. The objects in the car are visual interpretation of the memories that Sabrina notes within her letter. They also act a visual payoff that the audience can understand at the end of the film.

An object also plays the central role in the film: Sylvia herself, the titular character. What do you think of the relationship audience members develop with the car as the film progresses?

Prendergast: I think our film’s success is mainly due to its relatability to the average person. A lot of people remember the car that they had in their formative years and reminisce about it through rose-tinted glasses. For us, our only mode of transport was a camper van that my Dad converted from a Renault Traffic. We had the best holidays and adventures in that thing and it was a sad day when he decided to sell it. I think the audience empathises with the lead character’s dilemma of having to sell off the car, even though it’s part of the family. It’s not until the end of the film that the audience discovers that she’s selling much more than a car.

How did you find the ideal vehicle to portray Sylvia? Did you know immediately when you saw it?

Prendergast: I toyed with a lot of different vehicle ideas for Sylvia. I wanted to give a nod to the fact that this was an American story, so I looked for 1980s British station wagons. I couldn’t quite find the right thing and the ones did look the part were generally way out of my price range. Then I stumbled upon the 1984 Opel Senator. It had an American aesthetic about it and after little research, I discovered it was a Chevrolet design. In addition, there were only 3 of them in the country, so it had additional bonus points for uniqueness. Plus for £700, it was a no brainer. Did I know that this was the car when I first saw it? I’m not gonna lie, no, I wasn’t 100% sure. I mean, it’s not the prettiest. But now I can’t imagine Sylvia being anything else.

How did you use cinematography and narrative to give Sylvia an almost living character?

Prendergast: Again, this is all down to the true story. Sabrina’s letter speaks as if Sylvia is a member of the family or at least an extension of. I knew that I wanted to make a road trip film and take advantage of the amazing locations that we have here in our home county, Norfolk. So it really was a case of getting as much family interaction as possible whilst the car was in motion. It’s relatable for most families to have a familiar playlist in the car and Dr. Hook’s “Sylvia’s Mother” really helped bond the car to the family and of course, that is where the name came from. I like to have a lot of movement in my cinematography, so we used drone, cable-cam and tracking vehicle to give the sense that the audience was coming along on the journey with the cast. For the audience, I always hoped this would help them bond with the characters.

Prendergast: Modern cars seem to have lost their character somehow. I’m not sure if it’s because they’re too sterile or too efficient but they just don’t have the same charm as cars the last century. Our car doesn’t have a name but we did get pretty attached to the Opel Senator. Rachel, my wife, produced the film and our two daughters, Maisie and Evie, acted in it. We spent a lot of time [in] that car and made a lot of fun memories in it. Weirdly, by the time we had to sell it, we had [a] Sylvia of our own that none of us really wanted to sell. 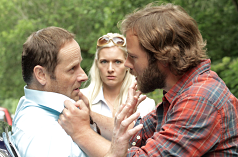