If you were to choose, out of all of the films that you have watched in your lifetime, how many would you have said opened your eyes to new visions of the world? How many of those were Non-English Language films? Specifically, how many of those were Chinese films? The cinema of mainland China remains one of the most revolutionary inclusions of past and present filmmaking. With the emergence of Eastern directors such as Zhang Yimou, Chen Kaige and Lou Ye, new styles and forms were bought to the film industry, developing both Eastern and Western cinema. From the Fine China of dynasties to the raw village lives, this cinema allows all of us to see the many facets of the Far East.

As noted through its most popular pieces of film, China’s most powerful political and social issues, of predominately the 20th century, gave global access into the country’s most profound periods. To which provided teaching and understanding of China’s history and culture. Within an industry of all traits, let’s admire the beauty of film and review China’s most notable films.

Commencing the list of course had to be The Last Emperor, not only due to its cultural importance within cinema but also its political importance in Chinese society too. Directed by Bernardo Bertolucci, the Italian director put the dominance of communism in the nation’s consciousness, making its history bare to both Eastern and Western audiences.

The story tells the life of Puyi, and his life through becoming an emperor at 3 years old to his older days as an adult and the reversal of his power. The movie also portrays the difficult relations between China and Japan prior to World War II, highlighting the change of China during this time. The film was a world-wide success and earned major praises and awards, such as winning all of its nine Academy Award nominations; including Best Picture.

Raise The Red Lantern deserves praise for not only it’s incredible directing and cinematography, but also for its message of patriarchal dominance and classism. Directed by China’s own Zhang Yimou, the film presents 1920’s China and of course, as expected of the time, sexism, and classism.

It stars Gong Li as a young woman named Songlian who becomes one of the concubines for an affluent man during China’s Warlord Era of 1916 – 1928. Songlian shares the role as mistress with three other women, who ultimately fight to be the master of the house’s (Master Chen’s) favourite. The film was described as “one of the landmark films of the 1990s” by Jonathan Crow of AllMovie and received high reviews and nominations, making it one of China’s most influential movies.

Heading towards the silver-screen era, Spring in a Small Town owns a substantial hierarchy within Chinese 20th century cinema. Written by Li Tianji and directed by Fei Mu, this black and white masterpiece was not only filmed on a low budget but also with a small cast of five people and a minimal plot.

The film highlights the trauma for the country and its citizens after the war between China and Japan within the late 1930s. Despite the Japanese surrender, the aftermath of its damage and the post-war depression had dawned upon China. The film is highly noted in Chinese cinema for its significance in the cinematic take on the country’s politics. At the time, the movie had received disapproval from China’s communist party for its connection to socialism, leading it to be cut from cinemas not too long after its release.

A second addition for 1980’s Chinese cinema is Yellow Earth. With its noteworthy cinematography from Zhang Yimou and directed by Chen Kaige, this 1984 film follows into the similar footsteps of a common Chinese cinema theme: historical politics.

The film is based around the Chinese Communist Party and the Kuomintang, who ended their battle between one another to help invade Japan. We follow a communist solider (Gu Quing) largely through the CCP and KMT controlled areas of Shaanxi, to collect folk songs from the village people to boost the morale of the Eight Route Army. However, what is notably praised the most is the cinematography, which had been described by TimeOut as ‘the first modern film to emerge from China’, from the intensity of Yimou’s artistry eye and pioneering captures.

This 21stcentury addition takes its format through a black and white lens, following its 1930s plot based during the Battle of Nanjing period. As seen from the other movies on this list, due to its substantial impact upon the country, the war between China and Japan within 1937 has been a large influence for Chinese war films. The director Lu Chuan, didn’t sugar coat the raw, horrific effect of the war, and through a 21stcentury lens, we see the factuality of war and its astounding victimisation of its people, and ruining of its land.

The plot presents the damage following the massacre committed by the Japanese army during the Second Sino-Japanese War, particularly the Imperial Japanese Army’s capturing of Nanjing (the capital of Republic of China) and the historically noted Nanking massacre. The realness of this film made it highly praised for its “gut-wrenchingly up close and personal” view of the Nanjing Massacre.

It would not be reasonable to speak of the best Chinese movies of all time and not mention In The Heat of The Sun. Based loosely on Wang Shuo’s novel, Wild Beast (1991) and directed by Jiang Wen, the movie’s main plot is set within Bejing during the Cultural Revolution of the 1960s and the uprising of Mao Zedong and the Communist Party of China.

The perspective is based around a teenage boy named Monkey (Xia Yu), and portrays his youth during an extremely political and totalitarian time. The film presents a confusing exchange that shows Monkey’s adult life within black and white, as if his adult years were his memories and his teen years within colour as if it were the present. The plot and the directing of the film expand on the mastery of this film, making it a huge success within China and the notability of its cinema.

While the list of the greatest Chinese movies can continue on for numerous pages, we will end it on a recent motion picture – The Lady in the Portrait and Cinéfile’s re-release of the film within selected cinemas from the 4th of September to the 17th of October.

Through this French-Chinese collaboration directed by Charles De Meaux presents The Lady in the Portrait, the sumptuous epic which induces a unique rapport between a French missionary (Melvil Popaud) and the Manchurian Empress (Fan Bingbing) whose portrait he’s ordered to paint. The movie is described by critics as “Exquisitely-costumed and voluptuously shot” – Variety and a “juicy tale of art, power and concubines” – Hollywood Reporter. The film will been screen at selected cinemas which include:

To view more about screening dates for the participating cinemas, visit Cinefile for more information. If you enjoyed reading Fine China then why not read Alive Design Here. 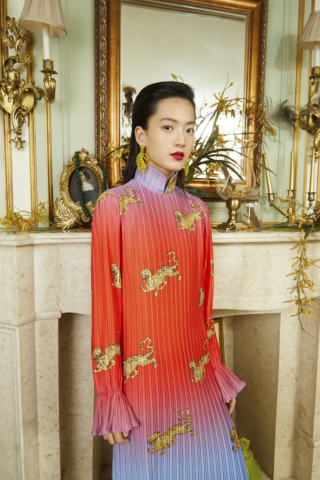