But can you think of any fictional examples of film that draw reference to the filmmaking process? And we don’t just mean breaking the fourth wall.

Filmmakers and writers are conditioned to recreate what they know and what they’ve seen. After all, in fiction, writers create characters who are all, in a way, versions of themselves. So of course, sometimes, film likes to take a look at itself, and writers and directors become inspired and influenced to create a story about the process of filmmaking. This may be meta-fiction, or simply a story that revolves around the creation of a digital image, a photograph or a film that leads to repercussions and consequences. In Antonioni’s first English language film, problematic London fashion photographer Thomas one day thinks he may have photographed something sinister; a murder. It’s a truly fascinating film, one that you won’t easily be forgetting, lurking in your mind like the ambiguous image on the edge of Thomas’s frame. After the success of Being John Malkovich, screenwriter Charlie Kaufman was approached to write a film adaptation of Susan Orlean’s The Orchid Thief. Adaptation though, is nothing like The Orchid Thief, and becomes a meta-story about Kaufman’s struggles of writing an adaptation of the book (with Nic Cage playing Kaufman), satirizing the adaptation process by turning The Orchid Thief into a formulaic Hollywood Thriller.

When (the real life) Kaufman brought this to the studio, Orlean’s first reaction was: “Absolutely not!” Maybe she initially didn’t like the fact that she was expecting her book to become a motion picture and the guy employed to write the screenplay came back with a version with her in it, and not only in it, but sniffing drugs and having sex with the subjects of her own book. However, Orlean warmed to the project eventually, and now admires the result. What’s this about? Where does the film within a film fit in here? It’s kind of up to you; that is what Lynch wants. As with most of his work, you can’t expect to come out of Lost Highway having fully or straightforwardly understood what has happened. Instead, you must involve yourself in an inscrutable world where the distressful videotapes which torment the lead character act as a metaphoric indication of a dissociation, suggestive of a disturbance in his identity.

Lynch’s Mulholland Drive (2000)and Inland Empire (2006) also play with film production in the plotline. Lost Highway though, is one of his bizarrely underrated works, barely talked about when compared to the likes of Twin Peaks or Blue Velvet. If you’re big on Netflix, then you’ve probably watched one or two serial-killers documentaries. It’s true, our society is truly fascinated by psychopaths and homicidal maniacs, and these shows just keep getting produced. Man Bites Dog though, proposes the notion, what if a documentary team followed a serial killer, like, literally followed a serial killer’s every movement, alongside him, to the point where they even become his accomplice? In this masterfully directed feature in which a couple are tormented by a series of videotapes posted to their home, Haneke intertwines themes of human manipulation and family, poking us with certain clues so subtly that the film leaves you to question your own morals, but speculative as to why or how.

Before Cache, Haneke’s Benny’s Video (1992) put the director’s name on the map. This earlier picture feels like a response to the video nasties moral panic, a comment on young generations becoming desensitised to violence. But it’s difficult to argue one interpretation of Haneke’s works. He encourages filmmakers not to spell things out too clearly for viewers, and believes that films should their audience more space for imagination and self-reflection. A horror movie eerily ahead of its time, Videodrome is classic Cronenbergian body horror with a “techno-surrealist” twist. It follows the CEO of a television company, who believes a show featuring violence and torture may be the future of broadcast TV. You’ve probably already heard of this one, but if you haven’t seen it, go check it out! 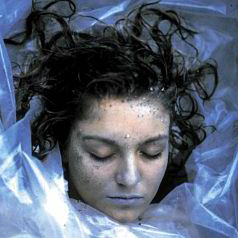 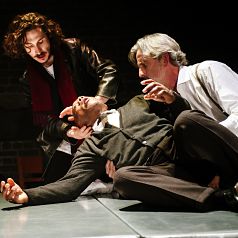