The artist Vlastimil Beránek is leading the movement of Bohemia crystal with his unique sculptures, created using the historic craftsmanship garnered from three generations of Bohemian artists. The inspiration for his works comes from natural elements such as water and fire. His series ‘Ocean’ and ‘Smoke’ use the art of sculpturing crystal to create pieces which embody the movement, energy and power of natural forces. The sculptures are geometrically engineered to create unique pieces of art, providing a distinctive style that is striking from every angle. Beránek’s sculptures range from 45cm in height to the world’s biggest crystal sculpture which stands two metres tall and weights over 300 kilograms. In the ‘Ocean’ series, Beránek uses crystal to interpret the power of the sea as well as using the colours to represent the depths of the oceans. The sculpture is designed to represent a wave before it crashes onto the shore.
The ‘Smoke’ series shows the simple movement of a plume of smoke after a match is extinguished. Beránek is a master technician of glass, and was educated by the great master of crystal sculpture, Libensky. He continues to innovate and create extraordinary sculptures which explore the simplicity of natural movement and energy, seen in his creation of the Ruby coloured crystal. The Beránek family brought Czech glass into the world of spotlight in the 1940’s and is now in its third generation. It has become one of the world’s most impressive examples of Bohemia Crystal.

Crystal and glass art is not only used in sculptures, but also in windows, especially stained glass windows. A famous artist who designed many stained glass windows is the Russian artist Marc Chagall. He was an early modernist and was associated with several major artistic styles. His work includes paintings, book illustrations, stage sets, ceramic, tapestries, fine art prints and of course stained glass.

This medium allowed him to fulfill his desire to create intense and fresh colours. The glass windows have the benefit of natural light which is constantly changing. It was not until 1956, when he was nearly 70 years old, that he started designing windows. In 1960, he began creating windows for the synagogue of Hebrew University in Jerusalem. He designed twelve windows that represent the twelve tribes of Israel who were blessed by Jacob and Moses. Each of the windows is approximately 11 feet high and 8 feet wide.
In 1964, Chagall created a stained glass window for the UN in honour of the UN’s second secretary general, Dag Hammarskjöld, who was killed in an airplane crash in Africa in 1961. The window is 15 feet wide and 12 feet high and features symbols of peace and love along with musical symbols.
Another building that contains Chagall windows is the Frauenmünster cathedral in Zurich. He designed five windows for it, which are 32 by 3 feet.
In 1978, he created a windows for St. Stephan’s church in Mainz, and nowadays tourists from all around the world pilgrim there to see the glowing blue stained glass windows by Chagall. It is the only German church with Chagall windows.
Chagall also produced stained glass windows for the cathedrals of Reims and Metz, the All Saints’ Church, the Chichester Cathedral and many more. Love these? If you want to have designs like these, Faux stained glass window films are available at Purlfrost. 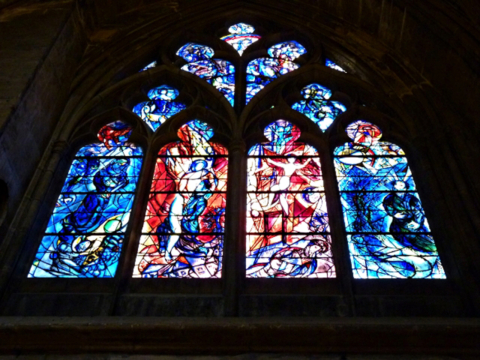