Along comes another Niche fragrance brand to the shelf. And let’s be honest, the shelf is getting rather full… But hold on. This, is one worth making space for. Welcome Modernist Fragrance London.

Meet the newest contender, which to be fair, packs this one hell of a punch. Delightful rich scents that don’t hold back or lack depth, yet are not complicated for the sake of adding ingredients. Perfumes that are built on bit by bit to be balanced out, a fresh take with a familiar undertone. NOT an easy feat, especially when the designer behind the brand is actually an ex corporate banker, and not a trained perfumer. Again I hear that sigh…stop it!  Never forget in life that some of the greatest people did not specifically train in the fields in which they found success, usually they are just damn fine creatives who end up where they are supposed to be.

John Evans (our man behind Modernist) confesses to being a life long perfume addict, who says he thinks his sense of smell comes from his mother; not that she was a nose, but the way she described smell was so distinct that somehow it penetrated his subconscious.  A love of fragrance and a personal buyer of many a scents, he was passionate about the subject but found in the end that they all began to smell all a bit ‘samey’.

“I don’t recall the exact moment when everything started to smell the same, but it was critical. At home, hundreds bottles of eau de cologne, perfume, aftershave and eau de toilette lurked about the place. As attuned as I felt to each of them, the more they proliferated, the harder they became to tell apart. They started to gang up into big bland families”. So what do you do? Egged on by his husband after a redundancy, he thought, ‘I may as well’ . And so began his journey not just into making a perfume line,  but also how to understand what perfume actually is, how it is built,  what accords are, alongside learning the business side,  bottling,  distribution, wholesaling,  retailing etc… So, after all the effort, one would hope the juice is very good.  As mentioned before, it certainly is.  Well, they are altogether, currently three fragrances; one on sale now and two more to follow.  He started the process out researching, smelling as many fragrances as he could and finding which were the scent stories and accords that really worked for him; what was appealing and interesting to him but also may well be interesting to others too.  The brand up to now has been about four years in the making.

He took on as much of the process as he possibly could, and although he does not call himself a nose, he regards his input as a driver of the brand and a Fragrance Designer.  He is one of a new gang of self trained perfumers that have opened up the market of niche fragrance: these are  perfumes for all and again as he says, ‘they are  unisex,  non binary,  gender fluid,  omni sex,  inter sex’ or just as we would say, down right sexy! As perfume should be…

The signature scent is The Modernist, (available now and the 1st of the trilogy)

The deep level of this scent is in many ways, unexpected.  It’s floral and citrus, but with a base of Frankincense and labdanum.   A sort of fruity,  floral,  zesty and smokey, and at 20 % it’s at a high percentage; it’s deep and rich in colour too. A big warm hit of frankincense but with a floral add-on and a citrus burst.  These two elements bring a really different take on a citrus floral perfume. Labdanum for a start is actually a woody floral scrub which produces a resin that was originally used in medicine.  It’s woody, creamy and balsamic and is even used as a fixative in fragrance – which makes sense here as it holds the woody element of the fragrance whilst being set against frankincense that smells pine-like,  lemony woody. So the base  of this makes a striking perfume.  Here we are actually talking base, but the middle is the floral via Freesia – not a flower that is often used in perfume, and of course is a synthetic, as freesia, although they smell delightful, don’t give up their scent.  At the top is the magnificent Bergamot, for that ever so bitter citrus with a tiny reminiscence, of course, of earl grey tea.   It settles and becomes smooth on the skin, where of course, all fragrance comes alive.

Number two and three are not out until winter this year but here is a preview:-

Geist ( the German word for spirit)

This like the others, takes you on a surprise journey.  It starts out like a cologne with top note hints of  green mandarin, a touch of lemon and bitter-sweet grapefruit with orange that takes you off left of centre.  Although it’s very fresh, it goes quickly to a slight sea water metallic (but not salty) – which is unexpected.  The fragrance then moves to Honeysuckle in the middle with Iso E Super , a sort of  dry,  cedar-like,  aspects and a slight phenolic nuance. Although the Iso E Super smell is not intense, it is rich and versatile. This then heads the juice off towards a slight woody effect, which brings in the base of  base amber, ambergris musk  and ambroxan.  A cool misty, yet hazy, zesty holiday by the sea where everything shimmers. From  a sharp citrus  via flora all the way to  a warm musk.  It’s classic yet so left feel and SO sexy

Lastly but not least,  is Nihilism

This starts off as PURE SEX!  It’s the kind of perfume where you get a first hit and want to lie down and ‘be taken’ . No kidding!  However its starting point is quite the opposite!.  John talked of being ‘dragged around cemeteries with his grandmother and mum, putting flowers on family graves’, and hence he smelt flowers from fresh to decaying.  The perfume has a ton of rose used here in a slightly more ‘animalic’ form by utilising jasmine with the rose (jasmine has an animalic note to it), alongside cashmeran, (a spicy, fruity, chypre, balsamic and vanilla feel, intended to convey the sensuous feeling of cashmere) .  It actually starts at the  top with fresh lime, bergamot and grapefruit, follows in the middle with the Rose, Jasmine and Cashmeran  and then with its base of tonka, a touch of vanilla; there is a little civet and (green) aldehydes, Tonquitone  and hedione, which lay the foundation of truly sexy anamalic floral.  A  challenging delicious new take on a floral of which john says is for

“confident women and adventurous boys”;  a mix of absolute rock and roll with a hefty hit of the classics!

Like all those rules breakers across any genre – because they never really had to work within a given structure, as long as an education is put in place, it allows for a new path to be trodden.   We see this new spirit here within these perfumes played out clearly: brave new thinking set within the classics.   The perfumes are direct, complete, not fussy and all congruent with great cut-through; directness, not simple, but well crafted.   There is a forth in the working, so we will keep you posted. But for now, The  Modernist is available, and Geist and nihilism will be available from Winter this year. 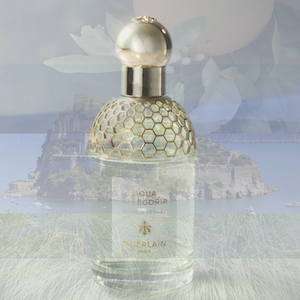