Artists are no stranger to juxtaposition. They often place pieces from different sources in one single art work to build up an intense visual expression. This month, .Cent meets three artists: Kyosuke Tchinai, Carl Randall and Nico Kos. Despite bearing different backgrounds, it happens that the three artists have all lived in Japan at one point in their lives. Kyosuke Tchinai is Japanese and is born in Namikata Ohchi in Japan, British artist Carl Randall has lived in Japan for 10 years; and Dutch artist Nico Kos has lived in Japan for half a year as an exchange student.

Here, the trio speaks about the juxtaposition in their body of work and how Japan has influenced their work.

“The world that I am portraying in my paintings is ‘utopia’. My paintings are about a paradise; of a dream world, Shangri-La, eternal four seasons, pure faith, elegant flower gardens, beautiful cherry blossoms, hills and waters of a fairy land, my admiration for ancient people and their beautiful art creations and the lingering scent of formless gods. The butterflies in my paintings are not just pretty creatures. They are symbolic representatives of our fathers, mothers, brothers, sisters, ancestors and their hearts.

Regarding the juxtaposition of Japanese and Western influences in my paintings, the influence of Japanese traditional art has always been the prominent element of my acrylic paintings. As a young art student, I was exposed to Buddhist paintings. And this was clearly a turning point in my artistic career. I think of myself as a trainee wandering in the universe of beauty. I cannot become Leonardo da Vinci, Johannes Vermeer, Gustav Klimt or John Everett Millet. But I hope to be an artist carrying a paintbox in this 21st century. I carry ancient Japanese art in my blood and Western art (representing knowledge, science, and technology) in my flesh. They are two vital elements of equal values for me.

When I entered Tokyo University of the Arts to study oil painting at the age of 19, I was carried off my feet by great European oil painters such as Hans Holbein. Then I was washed ashore in the land of acrylic painting. To this day, I have used acrylics (more specifically, Liquitex and Winsor & Newton). But I paint on Japanese paper hand-made by Japanese craftsmen and use other Japanese painting materials. In this regard too, the West and Japan coexist in my art.”

“A good artist in any discipline is a storyteller. If you want to tell a vivacious story, I think there should always be a form of juxtaposition in an artwork, in meaning and also from the visual point of view. Otherwise a work of art will diminish to merely decoration or muzak. Whenever the symbols in an artwork are juxtaposed, the viewer will stay mesmerized every time observing it again. Nowadays, there’s too much decoration in art, artists hardly dare to use symbols or tell stories. Who dares to juxtapose? I do.”

‘Mr. Kitazawa’s Noodle Bar’ is based on a very noisy, busy, lively noodle bar in central Tokyo. This liveliness is juxtaposed with the reduction of the scene to tones of grey – creating an atmosphere of silence, stillness and isolation. The painting depicts a counter as seen from above, juxtaposed with figures seen from the side, creating spatial tension (which I often like to do in my pictures). This painting can be seen at my solo exhibition ‘Tokyo Portraits’ at The Daiwa Anglo Japanese Foundation in London, Jan 16 – March 12, 2014.

A similar treatment of space can be seen in ‘Kyoto’, where a pond with Coi Fish (seen from above) is juxtaposed with a bridge and figures (seen from the side). The old and new, traditional and modern are juxtaposed with one another – a mobile phone and tower block shown alongside a traditional Japanese garden and Geisha. This painting is part of my exhibition ‘Portraits of Modern Japan’, as a result of winning the BP Travel Award at The National Portrait Gallery (now showing at the Aberdeen Art Gallery, Scotland till Feb 1st 2014).” 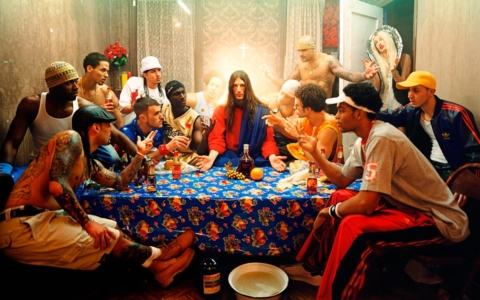