When I was at art school I was taught never to use black paint. My tutor – a respected abstract painter – was schooled in the New York tradition, where abstinence from black paint was common. In fact, go back through the history of art, many painters never used a pure black paint: Monet, for example.

Why? The pigment in the paint is so deadening and harsh that it immediately flattens the work. Most painters learn early in their career to mix a dark brown/black from primary colours.

So, in 2016 when we found out that British artist Anish Kapoor had exclusive rights to use ‘the world’s blackest black’, we didn’t predict the massive fallout from it. The black in question isn’t a normal paint pigment. Named ‘Vantablack’, it was created by Nanosystems to use on stealth equipment. Kapoor’s so-called monopoly on the substance sparked outrage in the art world. But we still weren’t sure why. Vantablack shows only %0.04 of light on its surface. The effect – as in a black hole – is an almost formless matter. If painted on a structure, any and all contour, pattern or groove virtually disappear.

“I wouldn’t want to judge Anish Kapoor’s artistic choices, thank God, experimenting is a freedom of choice, personally, when I use black in my work I create it myself from a mixture of colours, I don’t use it straight from the tube. For me, it’s more organic and alive when I mix it myself. Every material has its purpose and it’s moment and I won’t loose my sleep about Vantablack. I am sure that there is a great story behind everyone’s little-great world. Even a deadened canvas is an act more than an empty canvas. If we like it or not is something else.”

Read our review of the artist’s recent exhibition here.

If we assume for a moment that the problem isn’t around actually using the paint, it must be to do with the idea of exclusion, of having a monopoly over the substance. Contemporary artists are notoriously left-wing and often libertarians: they hate the idea that a new development for art is only available to one artist.

Leading the rebellion is a young British artist named Stuart Semple. The feud got particularly heated after Semple created a new paint – the world’s pinkest pink. It could be bought online for a small price, but with one condition:

It makes for an interesting story – sadly, the paint also comes with the disclaimer that they’re not actually sure whether it is the world’s pinkest pink, but it is the pinkest they could come up with…

In retaliation, Kapoor got his hands on the paint and posted a picture on Instagram with his finger submerged in the pigment.

Having to have the last laugh, Semple released the world’s glitteriest glitter, which was made from glass shards – the joke being that if Kapoor tried the same thing again he was be in for a nasty surprise.

Black 2.0 – This is the most pigmented, flattest, mattest, black acrylic paint in the world.

It seems like Kapoor no longer has his monopoly on the blackest black. Semple himself claims that he made this pigment for the benefit of all artists. Furthermore, his paints are priced at what they cost to make, so it does seem like an honest attempt to democratize paint.

Semple has just recently announced the release of his colour changing rainbow paint, available to all expect Kapoor. SHIFT changes from the mattest flattest black through the entire spectrum of colours and back again. 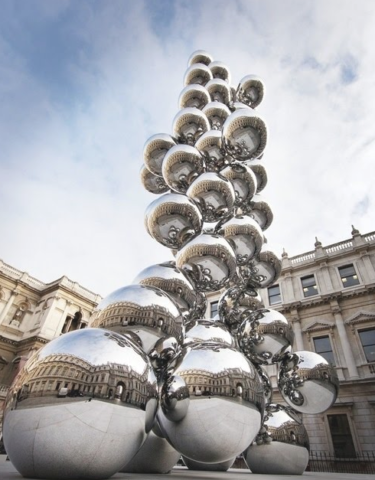