The London Design Festival was brought together by Ben Evans and Sir John Sorrell, who wanted to create an annual arts event that celebrates creativity in London. The first Festival took place in Bloomberg on 25th March 2003 and since then each year the festival celebrates London design.

This year’s two Landmark Projects are MINI Living and The Smile. MINI Living, “Forests” Installation by Asif Khan – MINI have teamed up with designer Asif Khan to create a three-part installation. The spaces explore the idea of living and urban environment as a response to ‘third’ spaces that exist, between home and office. These spaces, filled with plants, become mini forests in the three public London locations. With plant life curation from experienced horticulturalist Jin Ahn of the Conservatory Archives in Hackney, these spaces aim to become a “third space” for visitors, where they can ‘connect, create and relax in an immersive atmosphere’. The spaces are set up as interactive, as visitors can take plants home during the Festival. Each space is decorated with its own unique interior and plant life. Alongside the Forests installations, there will be a number of talks and sessions.

The installations are currently open. For more information, visit here. The Smile by Alison Brooks – Architect Alison Brooks and her firm have collaborated with Arup, Merk and the American Hardwood Export Council to create an installation which has been described as ‘an unidentified flying object’, an upside down arc made of tulipwood, known as The Smile. According to David Venables, European Director of the American Hardwood Export Council (AHEC), The Smile is the ‘world’s first ever hardwood megatube’. Available now to visit throughout the Festival, more information can be found here.

This year the special headline partner is British Land. Partnered with the real estate company, the Design Festival will host the British Land Celebration of Design. Winners are awarded for their contribution to a particular design field and are chosen by a panel of designers and those involved in the design field such as Justine Simons, Dr Martin Roth and Paul Thompson. The categories are divided as such: Panerai London Design Medal, as well as the Swarovski Emerging Talent Medal, the Design Innovation Medal, and the Lifetime Achievement Medal. Tom Price’s ‘Synthesis Beach’ – The artist presents the product of resins, tar and powder from an ink cartridge. ‘Layers of Ambiguity’ by Astrid Krogh – The artist weaves 200 metres of computer cabling; removing the insulating covering which exposes the silver and copper wires that are woven together with layers of foil. Stuart Haygarth – The installation named ‘Starboard’ is inspired by space. Haygarth takes 76 reclaimed keyboard panels and installs a number of LED lights so that it transforms into a galaxy. These installations are just two examples of what ‘Waste Not Want It’ aims to do – highlighting the creativity of Europe’s designers by transforming old items into new and exciting installations.

Bloomberg is an international news, financal information and business leader. Arts Co was founded by Isabella Macpherson and Sigrid Kirk in 2007. It is a ‘cultural production agency that curates and develops projects across the arts’.

‘Waste Not Want It’ opens on 24th September 2016 with the pieces remaining on location for 18 months. For further information on this event, click here.

Shoreditch Design Triangle – This event aims to celebrate the best of East London creative design talent. Organised by SCP, an influential manufacturer and supplier of contemporary design and modern furniture, showcases the talents that are on the streets of East London. Included in the Design Triangle are Rothschild & Bickers Pop-Up Showroom on Old Street, the Vitra Pop-up Office and EDIT. TOKYO on Charlotte Road. More information about this event here.

Designjunction – This year’s designjunction returns to King’s Cross. With the 2016 theme being ‘Immersed in Design’, we look at two interesting and important events amongst the many that they have produced. ‘Dyslexic Design’ – This year designjunction will again be hosting the annual Dyslexic Design project in support of the British Dyslexia Association (BDA). The project celebrates designers with dyslexia and is curated by leading designer Jim Rokos, who wants the project to not only remove the stigma surrounding dyslexia but highlight the positive aspects of living with it. More than 10 designers will be showcasing their work in the exhibition, among them Tom Raffield, Sebastian Bergne and Jim Rokos. The founder of the Dyslexic Design exhibition, Jim Rokos said “It is my belief that I am able to design the way I do, because of my dyslexia and not despite it. I also firmly believe that other dyslexic designers have idiosyncratic styles because of their dyslexia.” ‘No.1 Pendant’ by Tom Raffield

designjunction’s managing director Deborah Spencer also commented, “This is a subject matter very close to my heart. I had grown up with dyslexia and I believe it played an integral part in leading me down the path of art and design. In some respects this has defined me as a person. It is a great pleasure to support this brilliant project.”

designjunction will donate a portion of its ticket sales this year to the British Dyslexia Association at the end of the show. More information about the BDA can be found here and information about Dyslexic Design here.

‘Who’s Casper?’ – This event is a collaboration between designjunction and British furniture company, Modus, in order showcase design talent and raise money for refugees through Movement on the Ground, a charity that ‘supports refugees on the forefront of the European crisis’.

The event presents a challenge to designers; to customise the Casper stool, originally designed by Michael Sodeau and manufactured by Modus from 100% recycled cork. The identity of the artist remains a secret during the exhibition. In an interactive twist, visitors will be given the opportunity to guess who designed the Casper with the hashtag #whoscaspar? The customised Caspers will be available to purchase in an online auction.

For London Design Festival, contemporary design brand Darkroom teams up with tile company Bert & May to create a floating pop-up store, taking over Bert’s Barge that stays beside the Bert & May showroom. Inside the Barge, Darkroom have created a whole new world, showcasing their new A/W16 collection: Building Blocks. Darkroom have created an installation and collaboration ‘Split Shift’ using tiles that explore 3 different shapes- circle, square and triangle.

The floating pop-up runs until Christmas 2016. More information can be found here.

South East Makers Club – In celebration of the London Design Festival, South East Makers Club presents a trail that highlights the best of design in South East London. Taking place over the last days of the Festival, the journey goes from Deptford, Brockley, New Cross to Peckham. Featuring a range of exhibitions such as Sebastian Cox + Yeshen Venema at Deptford Market Yard and the Simple Shape joint exhibition by Luke Eastop and Jono Smart. A ‘Words & Workshops’ event will be held at the Lewisham Art House during the two days, featuring talks from Jay Osgerby and Max Fraser, Sebastian Cox and Eleanor Pritchard. A craft film festival will be hosted as will a South East Makers Market and finally concluding with a Pub Quiz hosted by Tom O’Dell and the South East London Journal. 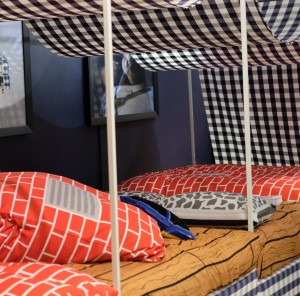 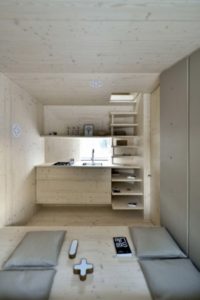