Girl on Girl: Art and Photography in the Age of the Female Gaze – the new book by writer, editor and curator Charlotte Jansen In 1975 Laura Mulvey published an 11-page article which revolutionized our understanding of the representation of women in visual imagery. In it, she refers to the ‘male gaze’ – a phrase she coined to describe the mode of male looking which empowers men but sexualises and objectifies women. It’s a much-heated topic and inspires as much tension as the sexualized images it purports to pertain to.

Coming from a film criticism perspective, Mulvey argued that many traditional Hollywood films respond to a deep-seated drive known as ‘scopophilia’, or sexual pleasure in looking. Most films, she suggested, were filmed in such a way as to satisfy an insatiable male appetite for dominance. It’s not hard to see why the controversy continues.

So, if we suppose that the ‘male gaze’ exists, is there a ‘female gaze’?

The female gaze has been written about academically, but not to the same detail. This is what writer and curator Charlotte Jansen occupies herself with in her new book ‘Girl on Girl: Art and Photography in the Age of the Female Gaze’. In the past 5 years women have been taking more photos of women than ever before, so she’s pressing the question: ‘what is the female gaze?’

She candidly writes that her project is pro-women, but that the art in the book isn’t necessarily. What she means, is that she is bringing together all sorts of female photographers who take the female body as subject, whether responding directly to the male gaze, or ignoring it all together. She is asking what the female gaze is, but she doesn’t try to give us a definition.

Jansen writes something in the introduction that becomes so evident in flicking through the book: “There is a fundamental pleasure in looking at women that is undeniable and unavoidable and tends to complicate the central place women have in visual culture.” The catalogue deserves to exist of its own merit – it’s anything but a token gesture in support of feminism.

I got in touch with Jansen to clarify some questions about the nature of the female gaze.

A: “Some people have suggested that the male gaze is toxic while the female gaze is corrective. In this sense, are the photos altered depending on who is looking at them? Do they only convey the product of the female gaze when female viewers gaze at them?”

Girl on Girl: Art and Photography in the Age of the Female Gaze by Charlotte Jansen is out now, laurenceking.com 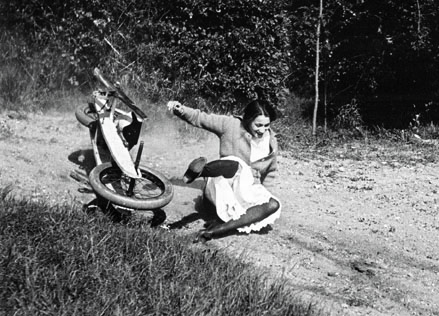