Football is one of the most well-known sports throughout Europe and has some of the biggest and best leagues in the industry. There are about 36 professional football leagues representing over 900 teams across the continent. Some of these include the British Premier League, German Bundesliga, Spanish La Liga, and Italian Serie A. Europe, in general, is also best known for its historic, unique, and attractive architecture. As expected, it is also home to a number of the world’s most stunning stadiums. Here is a curated list of the finest stadiums in Europe.

Wembley Stadium is home to England’s national football team and has hosted some major football games over the past few years. They include the 2011 and 2013 UEFA Champions League Finals. It was initially slated to host seven games at the UEFA Euro 2020, but that has been postponed to 2021 due to the ongoing global pandemic. When visiting this stadium, fans and architectural enthusiasts will be treated to other striking sights and attractions in London. For example, you can check out Big Ben, stop by Madame Tussauds Museum or even visit Buckingham Palace.

The current Wembley Stadium was rebuilt in 2002 with contemporary features to welcome it into the 21st century. It was designed for use as a multi-purpose venue, including hosting some of the world’s significant concerts and rugby tournaments. Its four-tier open bowl look gives everyone an excellent view of the pitch, and the retractable at the southernmost side of the stadium brings in more light and air for spectators. It also protects them from harsh weather elements. Its central symbol is the Wembley Arch, which gives London’s skyline a new look.

Gspon, Switzerland, is where the Ottmar Hitzfeld Stadium is located, and the stadium is home to the amateur football club FC Gspon. The incredible height of this stadium (altitude of 2000m above sea level) is what makes it unique, and it is the highest one throughout Europe. It is so extraordinary that it becomes a ski run in the winter! Can you imagine playing football while admiring the beautiful view of the Swiss Alps and greenery? It is truly the best of both worlds. The stadium was built in 2009 with an artificial pitch smaller than standard pitch sizes because of the lack of flatlands. Despite this, it tends to pull a small crowd for a remote location during the summer months, and they always leave the grounds amazed by the view. The downside, though, is that players often lose their balls down the mountainside.

The Stade Velodrome is the home stadium of the football team Olympique de Marseille. It was also used as a venue for the 1998 FIFA World Cup and still hosts other rugby clubs and games. This stadium was upgraded in 2016 and can now seat over 67,000 spectators, making it the second-largest stadium in the country right after the Stade de France.

Along with the upgrade came a stunning white roof made of Teflon, which fans had insisted on over a long period. The roof’s material is stretched over a metal structure to give it a scalloped silhouette. Its transparency also allows it to be illuminated at night, turning the stadium into a well-lit beacon.

The Kantrida Stadion can be described as unusual at best, but it is one of Europe’s most original and beautiful stadiums. The stadium is oddly situated between steep cliffs that are remnants of an old quarry. Even more stunning, you can see the sparkling Adriatic just south of the stadium and, in the distance, a few mountain ranges.

Currently, the stadium seats roughly 10,000 people but is soon due for an upgrade. A new stadium that can host an extra 4,000 people will be constructed in the same location. The stadium receives a lot of visitors even on non-match days because of its views.

The Croatian national football team has played several international fixtures at this stadium. Interestingly, they have never lost a match at the Kantrida Stadion.

Hasteinsvollur is a multi-purpose stadium located on an inhabited island in Iceland. Despite its multiple uses, it frequently hosts many football matches and is home to the Icelandic team Íþróttabandalag Vestmannaeyja (IBV). The stadium seats just over 2,000 spectators, so it is not an incredibly huge stadium. However, there are lots of vantage points that spectators can take advantage of. What makes this stadium stand out is its stunning backdrop. Imagine playing football or watching a match with volcanic mountains as your scenery!

If you cannot get enough of the Swiss Alps and snow-capped mountains’ incredible views, then it is time to visit the Rheinpark Stadion. In fact, it is easy to mistake the view for a postcard picture. This stadium hosts the country’s main football club FC Vaduz and the Liechtenstein national football team. The stadium was initially constructed in 1998 and was renovated in 2006 to increase its seating capacity to over 6,000. However, it makes provisions for standing grounds as well. So, on a match day, you can find as many as 7,500 spectators. The stadium is located near the Rhine River and is a short distance away from the Swiss border.

The Pancho Arena is truly an architectural marvel and is currently home to one of Hungary’s premier football clubs Puskas Academy FC. The stadium was completed in 2014 and had a seating capacity of 3,500. But what makes it stand out is its wooden interior design and incredible lighting system that brightens the stadium at night. It gives off a natural and earthy feel with its fan vaults that spread out like tree branches. Since its construction, the stadium has hosted multiple leagues and tournament matches.

Camp Nou is not only the biggest stadium in Spain, but also the biggest in the entire Europe! It could initially accommodate about 122,000 people; however, that was reduced to 99,000 after standing spots were removed entirely. Camp Nou is one of the few stadiums that has an impressive exterior. It is also home to one of Spain’s top-tier teams, FC Barcelona, one of the few European teams with the world’s best football players.

There are also numerous tourist attractions and is a short distance from Barcelona’s main city centre. So, on the days when you will not get to see Lionel Messi in action, there is a lot of sightseeing to do.

Constructed over 17 years ago, this stadium has a seating capacity of about 30,000 and is the home ground for Portuguese top division team Sporting Clube de Braga. What makes this stadium so unique is that it was built in a carved quarry overlooking Braga’s town. When you stand at both ends of the stadium, you can see the stadium’s stones and ruggedness. A roof covers each stand in the stadium, and all roofs are interlinked by a series of steel strings serving as a stylish ceiling.

The Estadi Comunal d’Andorra la Vella is a small stadium located in Andorra’s capital that has a seating capacity of 1,300 people. It usually hosts football games from the first and second division teams in the country. Until 2014, it was used to host the Andorra national football team. This stadium has an impressive backdrop of the Pyrenean mountains, and when paired with the stadium’s floodlights, can be a stunning sight to behold. It has a running track for other athletic sporting activities.

Old Trafford is a football stadium located in Manchester, England, and is the home stadium to Manchester United FC. With a capacity of slightly over 77,000, it is the largest football club stadium in England and the 11th largest in Europe. Old Trafford is also called The Theatre of Dreams, mostly due to the spectators’ magical sensation when watching football matches. It has a pretty interior with vibrant red seats. On the outside, the stadium is a contemporary yet industrial mix of brick and Plexiglas. It fits perfectly in this industrial city.

The Allianz Arena is located in Munich and is home to the football team FC Bayern Munich. It has a seating capacity of 70,000 for international matches. However, for domestic football matches, its capacity can increase by 5,000. The stadium has a luxurious exterior featuring nearly 3,000 foil air panels lit in either red, white, or blue. At night, it can be an incredible view to experience. This stadium is just another perfect example of excellent German engineering.

If you are a football fan or appreciate unique architectural designs, you could consider planning a trip around Europe to visit all these incredible structures and beautiful locations. Of course, it would be best to check out any travel restrictions due to the pandemic before planning your trip. 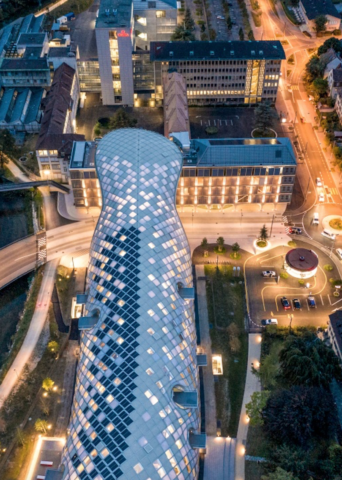 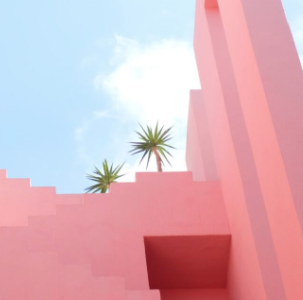