Flowers, grand gestures, dinner by candle light and walks along the beach; all these actions are associated with Romance. It’s part of human nature, to dream and as a result we often romanticize every aspect of our lives; our careers, our relationships and what it would be like if tomorrow we were to wake up a celebrity.

We are often seduced by the bright lights Hollywood that we fail to release how celebrities fabricate themselves in order to appeal to the wider population. James Ostrer unveiled his latest installation in Hong Kong recently in collaboration with Gazelli Art House. The Ego System presents “honesty portraits” of celebrities who utilise modern technology to capture our attention and suck us into their world of glamour and success. Ostrer features celebrities such as Kim Kardashian, Donald Trump, Miley Cyrus and Harry Styles as they embody success and are the creators of a false value that has us completely mesmerized which he aims to underpin in this series of work.

“I am responding to the vast divide between what we are being sold and what we are actually getting. I’ve labelled them as ‘Emotional Downloads’, which stand as a reaction against corporately contrived icons, the myth bearers that we are increasingly forced to worship.” Each ED (Emotional Download) is followed by the number of searches the subject has received. “I wanted to create these effigies of human insanity” explaining that his depictions of Miley Cyrus and Harry Styles epitomize how young stars become the latest commodities. Cyrus’s effigy showcases her rapid change from a Disney teen Queen to a tounge-poking half-naked twerking machine by dressing her in a fur coat covered in latex breasts which he believes is an indication of how young women feel the need to show flesh in order to be successful. All of his effigies are made with real animal parts ranging from hooves to actual animal flesh, symbolising our need to deconstruct anything in order to achieve a level of celebrity. He shows us the reality of what we fail to see because we are too focused on what is being sold to us, instead he presents us with the exact opposite of what we romanticize celebrity to be. 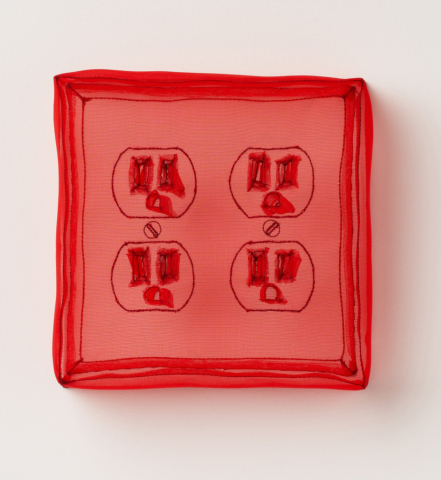