There’s that adage that you’re never further than 6ft away from a rat. This is a proverb that is actually true, or is at least an educated guess, unlike the classic myth that people on average eat eight or ten or however many spiders per week or per year in your sleep.

Of course, it’s not very cheerful to think about the sewage and the faces and the rats that flood and swarm under the ground below us, and it’s not very Cent. Sure, this is more of a Monday thought;  it’s one of those negative Monday thoughts one can’t help but have, like “Why is everybody in my way” or “English Summer rain, Nothing ever changes”, but today is Friday and the sun shines outside, and the weather ahead is as promising as ever.

So let’s talk about those who see opportunity in the hideous, in the banal and in what has rotten, for it takes a unique mind to become inspired to turn something grim into something artistic and reflective, to take everyday bromidic and sometimes even revolting locations and turn them into something special.

Just take this huge London ‘fatberg’, a disgusting congealed mass of congealed waste, which has been removed from the sewers after causing blockage, and will now become part of a museum exhibit. It’s full of grease, fat and non-flushable items like wet-wipes and condoms. Many would disagree that the above is a form of art at all, which is fair enough, though placing it in a museum certainly turns Nothing into Something, or at least puts Nothing into perspective.

To say that all forms of art start with making something out of nothing would be a mistake since everything begins with an idea, yet graffiti is a form of art that turns some place insignificant and unnoticeable into something intriguing and different. Of course, we as a race have explored and utilized the underground for various uses and practicalities such as waste and transport. But art can transcend and reflect this everyday nothingness.

Located on Leake Street underneath Waterloo Station is the Rat Bar, and it opens with the Banksy masterpiece ‘Giant Rat’. The salvaged work feels like it’s been inspired by a world in which a huge rodent lives amongst others, swarming, only interrupted by one man with no face who comes down for inspiration in his quest to shout about anarchy. The bar is situated on the UK’s largest legal graffiti tunnel, also known as ‘Banksy’s tunnel’, where the enigmatic artist launched The Cans Festival in the same spot 10 years ago. With the aspiration to help further establish the neighbourhood through live music, collaborations, art and culture, Rat Bar offers the perfect hideout to escape the rat race and find your own poison. This week’s exclusive at the rat bar? Daniel Ratcliffe: 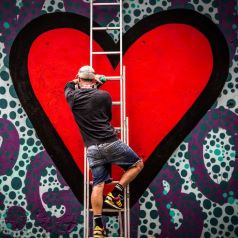