It’s undeniable that trash in the form of plastic bags is a huge issue in our society. The human footprint grows larger and larger by the minute, and many artists have attempted to stomp out our impact on the earth through art and design. Trash and design of textiles are two elements that obviously clash, as the textile industry is responsible for a lot of the waste that enters our wold. But, with these innovative mixing of both the elements it creates a beautiful product, as well as, saving our ecosystems! Did you ever think that the bottle you just threw away could end up in your closet in the form of your favourite dress? A trending movement amongst the complex world of the internet and artsy crowd is using plastic bags as a form of textiles and fabrics. Renew Merchandise is a company that specialises in using plastic to create clothing.Plastic bags being thrown out all over the streets has become a huge environmental nuisance as well as a burning eyesore. The process which transforms used plastic bags into textiles and fabrics involves fusing different plastic bags together through ironing them. Different strokes and times of ironing the material creates a vast variation on textures. This profound up cycled material is not only a way of recycling, but also so versatile! A larger company, G-Star, has also taken it upon themselves to spread social awareness of littering in the form of creating a brand new collection ‘Raw’. The collection ‘Raw’ was launched by Pharrell Williams, and is the first ever jeans collection that produces denim which is made from ocean plastic. This not only gives the material a second life, but also gives the oceans ecosystem to thrive.This collection has really attempted to stomp out the human footprint on Earth and has began to change the tide on ocean pollution. Vinylux is another company which recycles old vinyl records and recreate products such as bowls. The records are heated up and then moulded into funky shapes to create interesting bowls that can be placed around your home!

A recent, and if I may say so myself stunning, creation of ‘Dress for Our Time’ by The Helen Storey Foundation. This is a paramount idea of exploring the notion of climate change and the impact of humans through the form of a digitalised couture dress. It was created from an old tent which was unusable, giving it a second chance at life! Through giving the tent a second life, the dress becomes a symbol of humanity and how minuscule our existence is compared to nature.

Mixing these two contrasting elements indisputably creates breathtaking products while promoting ecofriendly behaviour in our current society. Jump on board the eco-train and try one of these handy techniques at home! Be the part of this movement and sea the change! 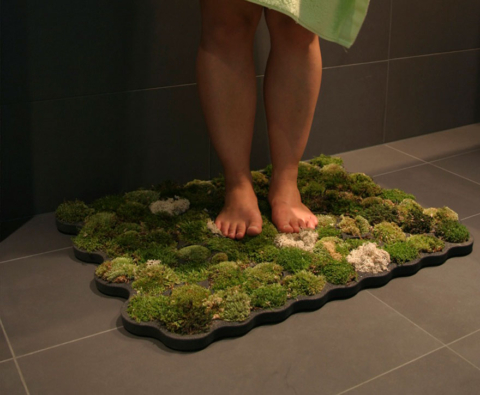