Flowers and fags – two rakish things our editor loves and looks for in a perfume. And yes indeed, there is a brand that offers this unique combination of scents in a fragrance called “Jasmin et Cigarette”. This perfume is the creation of the ambitious French perfume brand Etat Libre d’Orange.

This brand is a whimsical, audacious, passionate, and liberated perfumery and describes itself as a perfumery with a point of view that shakes up prejudices and stirs up ambiguities. It uses irony to hone the names of its scents and its perfumes are created to seduce and to rebel. The fans of the brand love its ethos of luxury, provocation, irony, subversion, and elegance.
As the founder of the brand, Etienne de Swardt, would say: “It takes a dangerous man to make a dangerous perfume”.

He established Etat Libre d’Orange with the idea of starting a revolution and creating a challenging perfumery. He is a graduate of the prestigious business school Institute ESSEC and worked for companies such as LVMH and Givenchy in the past. When he first became independent, he created luxury fragrances for pets with names such as “Oh My Dog!” and “Oh My Cat!”. The name of his current perfume brand “Etat Libre d’Orange” translates to “Orange Free State”, which is his birth place in South Africa. According to him, the brand was created “to be a land of shameless frivolity, joyful nonsense and of insubordination” and is open to everyone, inclusive to all, especially “the stateless smugglers who love to live on the borders”. With his perfumes, he tries to leverage emotion and excitement, which is expressed through erotica, femininity, and masculinity. He creates a collection of fragrances that ask “who do you want to be today?” The brand currently presents a collection of 34 fragrances and over the last years, it has become a respected constituent in the world of perfume, as it got five stars from the New York Times in its classification of perfume houses and it was also honoured with The Specialists’ Prize by the Fragrance Foundation France for having created an innovative and daring perfumery.
The three coloured rosette symbol is printed on all of the flacons and it symbolizes liberty and the proclamation of difference. Apart from that, the bottles are very simple and plain, because the concentration is on the juice and not on the packaging. The brand says that “Etat Libre d’Orange doesn’t spend time, energy, or money in the design of its bottles. We are perfumers, not glass-makers. A simple bottle – solid, serious, attractive – holds the true creativity”. Here is what Etienne de Swardt himself says about his perfumery:

Jasmin et Cigarettes – Personally one of my favourite fragrances, but tell us please where did the idea come from?
“Greta Garbo, Marlene Dietrich, all the great divas of black and white movies.  As they glide across the screen, what kind of fragrance would surround them? Twilight seduction, alcoves and Clairs-obscurs are inspirations behind the scent. We love to say : “elle habite le souvenir d’un manque”, the eternal “femme nicotine” so addictive like the image of Sean Young in Blade Runner at the Tyrell corporation smoking in front of Harrison Ford, what a panache, an absolute  seduction, the perfect gesture, very phallic, very masculine and then so intensely feminine. Absorption. Capture.” Dangerous Complicity – You talk of masculine and feminine here, one yielding to the other. Tell us more about your inspiration behind this scent.
“This isn’t about the battle of the sexes – it represents a united front that can be just as violent!  Lovers can be partners-in-crime, creating havoc.  Love is never simple. Gimme Danger is a little stranger. Rum, lipstick and leathery notes make a formidable explosive cocktail on skin, ménage à 3 oblige!  Definitely not a déjà vu.” Rien Intense Incense – you state to apply with caution. Why?
“Because it’s such a powerful scent, and it demands a reaction. The wearer can’t predict how people will respond. Rien is everything, for all the Dorian Grays beyond  narcissism or vain vanity. Rien is the quintessence of our human comedy. A blend of Balzac and Oscar Wilde, a gift from the 19th century that echoes in eternity through the magical incense.” Putain des Palaces – Putain is french for whore – do you really feel this is a perfume for loose women?
“Not at all!  It’s a fantasy, for anyone who daydreams, who wonders how it might feel, to be that elegantly sensual woman – or man! – who knows the power of seduction. Killing me softly on a sofa.” Many of your fragrances deal with duality, why do you feel this is important? It’s almost as though every perfume is made up of two different people?
“There’s a mathematical principle, that duality exists under certain conditions.  Our perfumes suggest that we all have multiple states of being, even dichotomies, in our characters — some mutually exclusive qualities that somehow come together. We belong to the borders, a crossroad fragrance house, a place where everything starts and ends. Yes we are dual, like a blade, a guillotine. “Aux flacons citoyens, guillotinons le mauvais goût!”, here is our mission on skin.”

Please tell us a little about how you go about choosing the names for your fragrances as some of them are so unexpected and wonderfully frivolous.
“Each perfume has a story, based on a concept.  Then we search for words that capture the essence of the story and the fragrance.  Our perfumes names are witty, memorable, and always unique. They try to take the perfumers on the road less travelled of creation and leverage their emotion, no taboo, no diktat, just emotion, sincerity and nonsense.” The products can be purchased here. 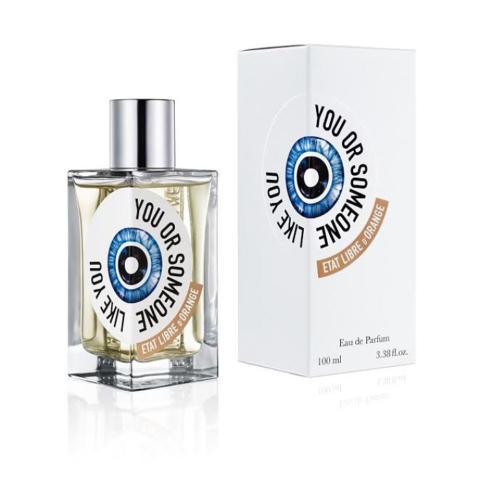