Magic has always been a subject filled with imagination and mystery. The belief in some form of supernatural existential runs throughout human history. Magic first started to appear in early Babylonian and other religious texts where secret words, spells, and incantations can be found. In the past, religion, science, and magic were connected in society and difficult to set apart. During the Middle Ages, alchemy, the magical transformation of base materials, led to a new fascination with the occult. At the beginning of the twentieth century, a return to earlier magical traditions occurred and nowadays, magic has many facets such as the modern pagan religion Wicca in Europe and the US, or nonspiritual stage magicians who use magic for entertainment. In an increasingly rational and scientific world, the idea of the occult gives access to another reality and therefore, the belief in magic is as widespread as ever.

The book “The Occult, Witchcraft and Magic” by Christopher Dell combines several texts and over 400 images addressing the history of magic and occult from all around the world. It explores all things cryptic, mystic and other-worldly, from the beginning and earliest evidence of magical thinking to magic in our digital age and the newfound interest in paganism. The book features several images from rare and unusual sources as well as some best-known representations of the world of magic. Furthermore, it shows the reader cross-cultural themes and profiles of key figures from its history. Adopting this magic and occult theme, the fashion brand Preen by Thornton Bregazzi looked back to our roots in their Spring Summer 2017 show and took inspiration from Mother Nature to celebrate their 20th anniversary. The influence for their new collection includes witches, the 1970s, astrology and other urban themes. One of Preen’s designers, Justin Thornton, says that witchcraft and practicing witches are a normal thing at the Isle of Man, where the designers are from. People even go to witchdoctors there when they are ill and he thinks that it is very weird but quite cute. Thornton says that he wanted to add a magical theme to this season’s range and therefore, their show focused on witches and paganism and the love for nature. This theme is expressed through items such as petals on the foreheads and on the décolletage as well as in the hair of the models, which was plaited into small braids with leather binding. With this range, Preen created their own idea of witches who wear florals, gauzy dresses and handkerchiefs that move like the wind. The brand also touches upon magic in today’s society, as they added a slight sci-fi feel to the Mother Earth theme. It is expressed through sparkles on dresses and skirts in metallic silver and through embroidered pentagrams on sheer black gowns. Find out more about “The Occult, Witchcraft and Magic” here. 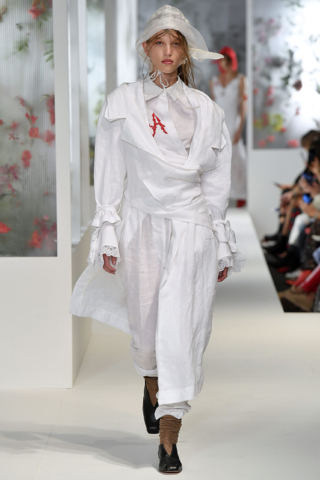 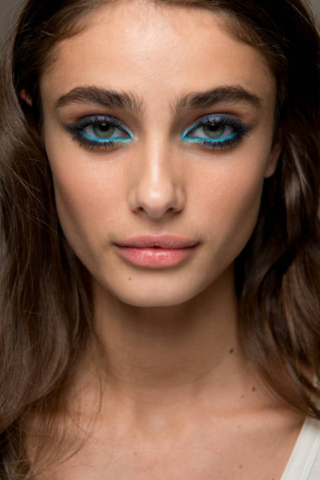