It’s called the wood of the gods or more commonly agarwood in Asian regions where it comes from, but we are more likely to call it by its Arabic designation: Oud. This wood from the Aquiliaria tree has been used not only for perfumery but also for medicinal and spiritual purposes over time. Used in wooden incense chips, oils and fragrance, this prestigious and highly prized raw material is becoming popular again.

Oud is actually extracted from a precious resin secreted by the Aquilaria tree as result of a defence mechanism when it is infected by a certain mould. Only two or three varieties of these tropical trees produce oud but it is impossible to identify which one. Therefore, a considerable number of trees had been cut down. For that reason, they are now protected in many countries and that’s part of the reason for the cost.

Although originating from South Asia, the millennial essence widely associated with the Arabian Peninsula had long-time fascinated Westerners. It is now the Oriental’s turn to acclaim more innovative and diverse European interpretations.

There are plenty of options when it comes to Oud fragrances on the market nowadays from Tom Ford or Comme des Garçons just to name a few.

But, when it comes to exploring every single facet of oud in its entirety, there is no better alternative than Amouroud as they offer various fine-worked declinations of it. In fact, driven by their amour for the oud, each of the fragrances in the Amouroud collection is created with the highest quality raw materials to offer super long-lasting scents.

Innovative, refined and characterful, their new “Oud Tabac” from the Amouroud collection created exclusively for them by Ilias Ermendis is exactly one of them.

Opening with a spicy blast of Coriander and Ginger along with a touch of Saffron and Heliotrope, its heart composed of Olibanum, Amberwood and of course Oud is followed by toasted caramel notes of Vanilla Bourbon, balsamic Cistus and smouldering Alaskan Cedar all blended with captive Musks. As important as Oud in the Arabian peninsula, a very popular scent had been used for decades in the West and is still often used by brides on their wedding day. Indeed, Orange blossom remains a highly coveted aromatic, sweet and elegant scent. Thanks to the multitude of oils that are drawn from its leaves, flowers and fruits, the orange blossom tree called Bigaradier offers different varieties of citrusy-aromas. Neroli, Orange Blossom water, Orange Blossom absolute, Bigarade or Petitgrain are all produced out of it.

Although the commonly called sour orange tree is native to China or India and grows all around the Mediterranean, it’s generally those that grow in Tunisia or Morocco which are used in the essential oil market. Lasting for about 2 weeks, the orange blossom season usually starts at the beginning of March or even in late February. Seville is just one great place to fully experience it as the whole city is adorned with thousands of bitter orange trees impregnating the air with the distinct aroma.

The beautiful white flower smell is appreciated by anyone across the world. It’s used by many top perfumers as a top note and is usually combined with many floral notes to achieve a clean and fresh not to mention elegant scents.

Here we take a look at one of the best orange blossom perfumes on the market; Jo Loves Orange Butterflies Parfum from Jo Malone which just launched in April. 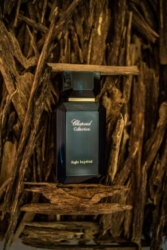