The Festival Iminente came to London this October 2018, taking the soul of Lisbon to the heart of London. Founder and artist Vhils collaborated with Underdogs at the Old Truman Brewery in London in order to create a bridge between subcultures, hosting both Portuguese and International art and music in an incredible, immersive experience.

The festival hosted a line up of extraordinary acts from Fatboy Slim, who collaborated with artist Vhils to produce a 180-degree screen of visuals and sounds, to other DJ’s and artists from both Lisbon and London, bringing urban influences together in a veritable subcultural mash up.

Founder of the Festival Iminente, Alexandre Manuel Dias Farto, known as artist Vhils, is a poet, not of pen to paper, but of chisel to wall. Born in Lisbon, Portugal, Vhils went on to study at the Byam Shaw School of Art in London as well as Central Saint Martins. His work evolved from classic street art graffiti and moved to a place of ‘graphic sculpture’, where his faces created out of the walls of cities develop a space for social commentary and connection.

“Plaster on wall is almost like a makeup on the city, and [I was] breaking this makeup and delving into the essence of everything” – Vhils

Vhils’ breakthrough came in 2008, when he produced a portrait next to a work by Banksy at the Cans Festival in London, gaining international acclaim. Pushing the boundaries of what street art is, Vhils excavates the walls of cities around the world. An “urban archaeologist”, who strives to make the invisible visible in homage to the city.

Breaking down the surface layers of walls, the celebrated building blocks of the city, Vhils unearths the carcasses of everything that the city is founded on and everything that came before; plastered advertisement on top of other advertisement, chunks of billboards, guarded fragments of brick and cement. His art is the wonderful mixture of old and new, ruin and creation. And although torn apart and seemingly destroyed, the histories carried within these walls are transported to the forefront of what we see when we look at Vhils’ constructed and deconstructed faces. “[These are the] faces of the people of the city. Not someone famous. The powerfulness of the site of someone looking at you is to humanize the places that you live in. That’s the first impact. The second is about identity and what shapes us in the way we are, how little impact we have on the cities we live in and how much of an impact they have on us. (…) An homage to the city. “- Vhils

Concerned with urban life, Vhils looks at the specific interactions between locale and locals. How do these cities affect us? Vhils art reminds us that the city adopts its’ own organic living dynamic, where its’ history, culture and politics, imperceptibly embedded within its man-made structures, have an extraordinary impact on one’s identity.

His work not only pushes boundaries but creates a space for social commentary. Location is of utmost importance to Vhils as his work brings attention to a certain space or locale- and with this, has a cultural, social and economic impact.

“Art has a powerfulness of making bridges. And sometimes I do portraits of people or communities that are in a tense situation and no one is giving them a voice. Like Maria, an activist in Brazil that was murdered, an activist for kids in favelas that were victims of police brutality. The fact that when you choose someone or work with a community, you can have a practice as an artist, because if you work with them closely on a project where they are a part of the subject, you are not just bringing art to the discussion but price. An artist can create awareness for situations that aren’t fair.” This year as part of his aptly named Scratching the surface project, Vhils produced a portrait of hip-hop artist Siobhan Bell for the Festival Iminente in London at the Old Truman Brewery in Brick Lane, London.  Created from plaster and taking two days to create, Vhils was inspired by an artist who displays a unique style and whose music inspires and connects with what the Festival Iminente and sponsor Hennessy stand for.

Hennessy announced their 2018 collaborator for Hennessy Very Special Limited Edition bottle as artist Vhils. The new design celebrates its’ partnership with Cognac house Hennessy, known for its support of the hip-hop scene and new and innovative art. Vhils describes his design process, excavating visual heritage and history in a look towards the new, to Cent below:

“A long process, a lot of research. I tried to collect the old advertising material of Hennessy and kind of build it and blend them in layers. This was the process of one of the billboards. The edition as part of the main bottle was part of the process of a painting that I did with acid that burns the paper and reveals the image. A kind of reverse painting. I paint by destroying the paper, always gathering the visual heritage the brand has but with the portrait of someone looking forward. Paying homage to the past but also looking into the future… The support that Hennessy has given to a lot of cultures and their approach to communication with artists was always something that inspired me.” In homage to urban cultures, arts and design, the Hennessy Very Special Limited Edition bottle might just be the perfect gift for Christmas this year… 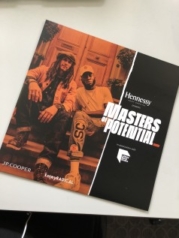