With more artists collaborating with brands, the art of mixing has taken off in recent years, and who else to take it to the spotlight than the masters of blending? More companies are using their resources and are collaborating with young talent to create raw, high-quality music. Hennessy have decided to let some talent into the mix with the help of the new Abbey Road Studios.

Hennessy has created a three year long contract with Abbey Road Studios for their ‘Masters of Potential’ Programme. No stranger to the world of music and quality, the Hennessy Very Special program combines artists with social political problems, and help to become some of the most prominent musicians of today. The Master of Potential panel will see the brands participating to create a one-off original piece of music to be recorded in the new Abbey Road Studios. Together, it will blend unconventional artists sounds together to create a dynamic and original record. The studios aim to integrate their musical histories, stories, skill sets and be given the chance to record a rare ‘live to vinyl’ tracks.

The first of the series done by panel member Alex Boateng, has included a Mancunian singer J.P Cooper paired with musical poet, Kojey Radical. They have come together to exclusively record the only live version of their song ‘Party’ featuring J.P Coopers ten-piece band. The double-sided vinyl also features a live performance of ‘She’s On My Mind’ the latest single by J.P Cooper. The two brands – Abbey Road Studios and Hennessy – felt a natural, raw and also somewhat obvious connection working together as the brands are engraved in the history and culture of music. They have released raw and powerful work that is in line with the Hennessy brand, and will continue to do so in the coming months.

J.P. Cooper’s main musical influences that have contributed to shaping his sound feature a variety of legendary artists. Eddie Vedder, Lauryn Hill, Counting Crows and Bjork. With such amazing people to learn from, it’s no surprise that JP’s musical output has been hailed as one of the most promising talents to watch. With a platinum nomination of Perfect Strangers with Jonas Blue, the artist is already making a mark on the music scene after his first album release.

Kojey Radical, a musical poet, focuses on themes of race, class and injustice. The young British poet is bringing credibility to socially conscious rap music. He follows Kendrick Lamar’s ideology about ‘making everything we (rap) about sound good’. Just like Kendrick, he talks about social justice, race, and class through his art.

Both artists have released the single Party on their Vevo but the rare live recording can only be found on the vinyl. Along with the special recording, Hennessey has released a special bottle of Cognac to celebrate the release of #HennessyVerySpecial. Do you fancy a drink and a rare song to go with it? Yes, please.. 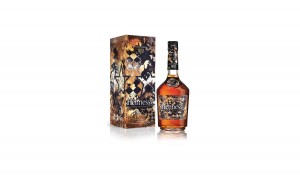