The LOEWE Craft Prize is an annual international award for excellence in craftsmanship and the 30th November has just been announced as the closing date for entries. The prize will be given to the maker of an outstanding work of craftsmanship, selected in competition among entries from around the world. The aim of the prize is to promote the importance of craft in today’s culture and to bring together the creativity and manual expertise of crafts from a variety of fields. The materials used in these works are usually made ceramics, jewellery, lacquer, metal, furniture, textiles or glass.

With this prize, the LOEWE Foundation wishes to recognise contemporary artisans whose talent, vision and skill will set a new standard for the future. In 1988, it was established as a private cultural foundation by Enrique Loewe Lynch. Today, the LOEWE Foundation still promotes creativity and educational programs. In 2002, the Foundation won the award of the Gold Metal for Merit in the Fine Arts, which is the highest honour granted by the Spanish Government.

They additionally revealed the winner’s trophy (seen below), designed by British silversmith Alex Brogden, whose work has been exhibited internationally and is held in important collections such as that of London’s Victoria and Albert Museum. He describes the LOEWE Craft Prize as a “welcome new platform to highlight the particular value of crafted objects in a world where they are increasingly rare”. In February 2017, the shortlist of finalists will be announced and in April, the winning work will be chosen. The winner of the trophy will be selected by a jury of distinguished art and design experts and will be given 50,000 Euros. Furthermore, the works of the winner and the 14 finalists will be highlighted in the LOEWE Craft Prize 2017 exhibition and catalogue, which will be on display worldwide.

More information can be found here. 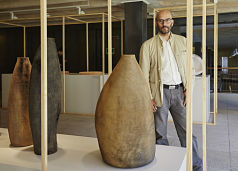