“Konstantin Grcic is a true design legend: he is a cabinet maker, industrial designer, founder of the Konstantin Grcic Industrial Design practice, and his designs form parts of the permanent collections of the world’s most important design museums such as MoMa – New York and Centre Georges Pompidou – Paris.” says the guest-editor of our ‘Path’ issue, Steve Bicknell.
The iconic watch brand Rado has collaborated with him on the redesign of one of their iconic timepieces, the ‘Rado Ceramica’, in which he gave a contemporary interpretation. To read the full story, check out this article in our magazine. Product design is something that can be explored and celebrated in many ways and not just through designing watches. For example, the Vitra Design Museum in Weil am Rhein, Germany will present the ‘Hello Robot’ exhibition from the 11th of February to the 14th of May 2017. In recent years, robotics has found its way into our everyday lives, changing them in fundamental ways. Whether it be in the form of delivery drones, smart sensors, or Industry 4.0, design plays a central role in the process of shaping interfaces between humans and machines. The exhibition explores the current boom in robotics in detail for the first time and comprises of more than 200 exhibits from the fields of design and art. It will include robots used in the home, in nursing care, and in industry as well as computer games, media installations, and examples of film and literature, in which robots feature. Furthermore, it shows the variety of forms that robotics takes today and at the same time broadens our awareness of the associated ethical, social, and political issues. ‘Hello Robot’ introduces us to robots in four steps. The first section of the exhibition traces the fascination that artificial humans have long exerted on people in the modern age and looks at how popular culture has shaped our perception of robots. The second section is devoted to the field in which robotics first made a breakthrough: industry and the world of work. The third section shows how we are gradually coming face to face with the new technology and the fourth section looks at the increasing blurring of the boundaries between humans and robots. The ‘Hello Robot’ exhibition shows the ambivalence with which the spread of robotics has been viewed for many decades. The controversy about the right approach to robotics is reflected in fourteen questions that guide the viewer through the exhibition as a kind of leitmotif. They invite visitors to reflect on their own attitudes to new technology and show how closely linked the opportunities and risks attendant on robotics often are. A programme of talks, films, performances, and workshops will accompany the exhibition and illuminate the theme of the robotics from a number of different perspectives. Another exhibition that currently takes place at the Vitra Design Museum is the ‘The Brutalist Playground’ exhibition, which opened on the 13th of January this year and will be on display until the 16th of April 2017. Brutalist architecture is a controversial movement that originated in Britain shortly after World War II, bringing rise to expressive structures made of raw materials with uncompromisingly rugged aesthetics. For this exhibition the architectural collective Assemble, winner of the 2015 Turner Prize, and artist Simon Terrill have used archival material from the Royal Institute of British Architects to recreate now demolished “Brutalist” playgrounds in hybrid architectural installations and walk-through sculptures for adults and children. The interactive presentation of ‘The Brutalist Playground’ allows visitors to explore the original spatial concepts of this architectural style. 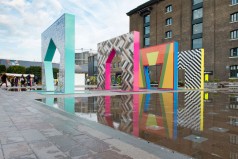