“Morag Keil: Moarg Kiel” is the first major solo exhibition in the UK at the ICA by Scottish, London-based artist, Morag Keil. The exhibition features work from the last eight years of her career. In these works, she explores the impact of digital technology on daily life.

Her installations, films, paintings and drawings offer interesting insights on the use of domestic automation. Subsequently, a less obvious interpretation of her work is taking it as a critique on social media branding and its manipulative power and, in particular, its influence on the human brain.

Keil’s art is an enlightening representation of the debate on the effect of the continuous stream of information our brain needs to process. Our news and social media intake is completely overwhelming and can lead to something called ‘compassion fatigue’, which is the feeling of being overwhelmed by distress and suffering around you to the point of disconnecting yourself from all trauma.

Psychologist Charles Figley defines compassion fatigue as “a state of exhaustion and dysfunction, biologically, physiologically and emotionally, as a result of prolonged exposure to compassion stress”. As a consequence, you experience physical exhaustion, become easily startled and feel depressed or even numb.

Keil visualises how technical and digital communication is mediating our lives, and taking away our focus on being present in the moment. In contemporary society, there is an increasing focus on image, appearance and superficial identity. Besides these picture perfect images of ideal lives, we are bombarded by horrific images on the news. This causes a decrease in empathy out of self-preservation; people start to reject information in order to survive this overexposure. This is a problem, as empathy is vitally necessary for basic human interaction.

Keil’s kinetic sculpture Closer (2010) consists of parts of a sex machine, moving in an ongoing rhythm echoing the clock at the other end of the gallery. The notion of the relentless motion of machines, this never-ending grind, is a harrowing representation of our own daily grind. The multi-screen video Passive Aggressive (2016) shows clips from animated advertisements Big Brother footage and close-up images of motorbikes. Her snappy, short, copy and paste style of filming is reminiscent of Instagram or Snapchat videos. Many people have a limited attention span, as information is presented in catchy, but fragmented ways.

Earl Miller is a neuroscientist at MIT and an expert on divided attention. He says that our brains are “not wired to multitask well…When people think they’re multitasking, they’re actually just switching from one task to another very rapidly. And every time they do, there’s a cognitive cost in doing so.”

In reality, multitasking and fragmenting your mind translates into stress, as there is an increase in production of the stress hormone cortisol, leading to impulsive behaviour. This causes mental fog, overstimulation and splintered thinking. The brain then ends up in a dopamine-addicted downwards spiral, rewarding itself for losing focus and searching intense and short external stimulation. Basically, checking social media and taking in news snippets all the time constitutes a neural addiction.

Keil’s video Potpourri (2013), consists of alternating images of a man and woman overlaid with the sound of a script from several sources, such as Instagram comments, is a perfect example of the blending of information we receive. Image, sound and reality blend into one huge mess. The gallery speakers blast Keil’s soundtracks Civil War (2012) and Shopping (2019) and force the audience to deal with this cacophony as the obtrusive sounds cannot be filtered out. Through these and other works, this exhibition at Institute of Contemporary Arts called Morag Keil: Moarg Kiel, a witty muddle of her name, offers a startling but eloquent consideration of how a world increasingly influenced by technology and digital communication is mediating our day-to-day existence. Interestingly, Keil is hard to find online. She doesn’t seem to do social media, and her voice only seems to exist in her work. After visiting this exhibition, trimming back the stream of information we receive daily doesn’t sound like a bad idea. The exhibition runs from 30 January until 14 April 2019. 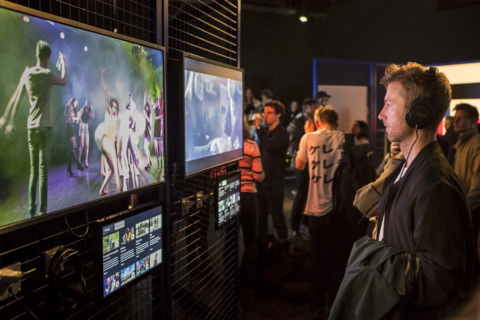