The prologue to the preview sampler for Miami based producer TenDJiz’s ambitious new fusion project reads like the vanishing point credits in 1977’s Star Wars. “In a galaxy far, far away, a lost ship drifts through space with three robots on board. One day, tired and bored of their daily duties, they decide to throw a party and sing their favourite Soul and Funk songs.”
The description sets the scene nicely for the album Synth Souls, a recycling of nine soul and funk songs using analogue synthesizers and vocoders giving it a “extraterrestrial” gloss. It creates a world that’s like the aforementioned Science-fiction epic, due it being simultaneously nostalgic and futuristic. It’s bound to spark competitive listening for fans of the popular 70’s genres of funk and soul, with ears glued to the speakers attempting to guess the samples. Although inspiration is probably the better word to use, as the songs have been reworked and re-harmonized by TenDJiz. The pairing of contrasting elements has been described as “Kraftwerk crossed with James Brown” by the producer himself. It’s also reminiscent of the opening to Funkadelic’s Red Hot Mamma, which experimented with the texture of voices with a funk background still present.
This type of creativity is not new and he has previously display his natural ability for mixing. The Russian born mash up maestro has already composed a collection of albums entitled The Soulviet Trilogy. TenDJiz took Russian spirituality and manifestos and blended it with the acapellas of hip-hop artists like De La Soul (on 2011’s De La Soulvitet) and Nas (2012’s CommoNasm) and even added jazz samples into the cauldron. It could be said to be a more urban version of the Jazz-collage band Koop.
Yet this new project is not only a new genre direction but the graphic accompaniment moves away from the Russian propaganda, into a less hostile environment of illustrations. If you are a fan of Janelle Monae, you’ll find the back conceptual back story endearing and Daft Punk fanatics will also get a kick out of it’s other-worldly robotic nature. Interestingly, it’s hyper-autotune vocalization might be a social commentary in itself, poking fun of today’s blatantly fake production techniques. Thus provoking the possible realization that it’s actual conceptual setting is in the present day.
It does make you wonder what genre he will venture into next? Here a sampler of the project here: https://www.youtube.com/watch?v=rGT9OunPjwI 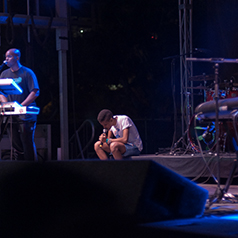