Lina Cavalieri is known to most as the face behind Fornasetti’s iconic designs. Yet there is so much more to her than this. Here we look at the life behind the face and the story behind the muse.

Born in the Italian city of Vitebro, Natalina Cavalieri was orphaned at the age of 15 before running away from the Roman Catholic orphanage to join a travelling theatre company. The love of theatre and music continued as she travelled to Paris where she sang in a café, and eventually gained recognition. She gained traction as an opera singer, making her opera debut in Portugal as Nedda in Pagliacci in 1900. Lina’s career as an opera singer continued in Monte Carlo and America, more specifically, Oscar Hammerstein’s Manhattan Opera Company and the Metropolitan Opera in New York. Her popularity grew worldwide. Yet it is said to have been her beauty that captivated audiences. She was frequently called the ‘Most Beautiful Woman in the World’ and ‘Most Photographed Opera Singer’. Known for her hourglass figure thanks to corseting, she influenced women to enhance their silhouettes.

Lina not only worked in music and theatre but beauty. She opened a salon in Paris, wrote a beauty column in Femina magazine and wrote her own book My Secrets of Beauty in 1914. Her burgeoning career as beauty influencer continued as she sold perfumes and released a beauty range in 1926. This did not stop her career as an actress, as she worked in both Italy and America starring in silent films like L’idole brisée, The Two Brides and La rosa di Granata.

During the Second World War, she worked as a voluntary nurse. She died with her husband, during an air raid in 1944.

With muses in history, there is often focus on their personal lives. Although Lina married four times, including Russian Prince Alexandre Bariatinsky and French actor Lucien Muratore, what is much more interesting is the life she lived rather than the men she loved. In fact, her life is so interesting that her life is chronicled in the biography Lina Cavalieri: The Life of Opera’s Greatest Beauty (1874- 1944) by Paul Fryer and and Olga Usava. The book can be found here. Although they never met, Lina and Fornasetti have a special connection as muse and artist. Piero Fornasetti was an Italian artist, designer, painter and sculptor whose iconic work often featured the face of Lina Cavalieri. He is known for his unique style that is distinctive, creative and timeless. The story is that Fornasetti saw Cavalieri in a nineteenth-century French magazine and from then began painting her face. He transformed her face over 1000 times on a range of his products, including his Theme & Variations collection.

With the creative direction and design of his son, Barnaba Fornasetti, the brand continues to produce homeware, fashion accessories and home fragrances.

Fornasetti Profumi have released seven new candle collections, all featuring the face of face of Fornasetti muse, Lina. Introducing the new ‘L’Eclaireuse’ scented candle collection with a new scent ‘Mistero’ which is a warm and spicy scent with notes of pink pepper, incense and musk. Also new, is the L’Ape Scent Sphere & Crystals set, in ‘Otto’. Each new candle is encased in ceramic and features the signature Fornasetti Otto scent, with notes of thyme, cedarwood and tolu balsam. Yet what is different is that each collection features different Fornasetti designs. It combines history and art all in the luxury of your home. The new collections inlcude: Armatura, Golden Burlesque, Pennini Nero, Bacio, Archittettura and the Ordine Architettonico candle trio.

Fornasetti can be found at Harrods, Selfridges and Net-a-Porter. 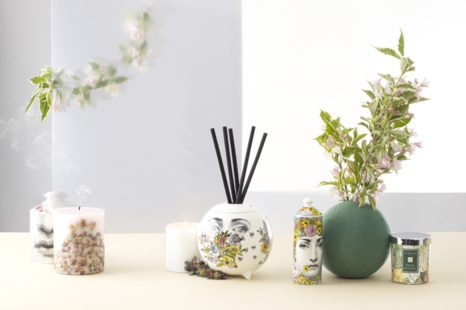 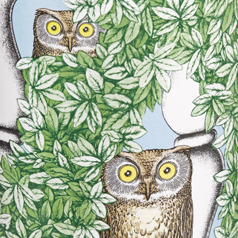