The recent presentation of the menswear collections in Milan proved to be highly forward thinking and as always pushing the boundaries of modern menswear.

Intricate, highly embroidered and regal; these are words that surface often when thinking about D&G, but not necessarily the words that first come up when thinking about Youtube stars.The casting was a highlight of the show being made up of influencers from the media such as Youtubers Marcus Butler and Jim Chapman and Sofia Richie. Dolce & Gabbana again stayed true to their heritage with Italian and dark interesting pieces. The collection had the usual gold tapestries and prints but with a visible modern touch. Puffer jackets, popularised by Balenciaga and then the high street, were some of the more dominant looks. These were with a Dolce & Gabbana touch, however, with Renaissance print patches all over them. There were patchwork denim jackets but over lavish black suits. Black velvet, mustard yellow and embroidered bomber jackets were the star pieces of the show, even the odd bathrobe. The futuristic prints used mixed with military-inspired tailoring maintains Jeremy Scott’s bold aesthetic. Dominated by army green, the Moschino Fall 2017 Menswear collection was full of harnesses, naive space prints and code page prints as seen on Sci-fi movies. The men were clad in full traditional army gear or in an orange rose print. The gear was either exposed or hidden, but it was obviously a sartorial exploration of how men prepare for war. Some of the berets and harnesses were covered in medallions as if to emphasise status. But if you take a closer look, the medallions are just safety pins, buttons and key holders. This was definitely an army of some sort, fighting for what they believe in and fighting for their views to be heard. A beautiful flow of shiny black, mouse grey and navy blue with flickers of white, the Diesel Black Gold collection was a showcase of contemporary class. Led by oversized and skin tight leather jackets, this collection had something for everybody. A tracksuit jacket, blue parkas and work jackets, the outerwear was definitely the highlight of the show. The Diesel Black Gold collection showed definite Asian influences with asymmetrical tailoring and deep v-neck kimono-esque necklines. Some of the coats were even wrapped with ribbons and had wide, elongated sleeves as if inspired by Japanese kimonos. There were textures inspired by traditional Japenese wave patterns. The use of interesting textile textures could be seen in the garments giving subtle structure to the looks. The influence of Ninjas was also apparent in the general feel of the collection It is already clear that these will keep many fashion savvy men and women warm next winter. The Dsquared2 show had interesting visuals with a lot of layering. The overall tone had an outdoors impact with different textures and thick hiking boots. Adorned by beanies as worn by Scrooge, this season the Dsquared2 designers were not afraid to be playful and silly. Packed with intriguing colour combinations such as moss green and mustard yellow and orange with a cow print, this collection was full of layers and a cascade of textiles. With a stark black finale, the show started off with plaid shirts wrapped around the waist, bright gloves in their pockets, neck scarves, sweaters in muted colours topped off with parkas and furry hoods. There was a sense of freedom, escapism and even some Kurt Cobain influence. It was an homage to Canada, the liberal nation that most Americans probably want to escape to, with silver plated hiking boots. Etro and Fendi showed kitsch touches with a generous use of colour and novelty accessories. Ethnic prints on a range of different textiles with a colour palette dominated by earthy shades, Etro showcases intriguing new ways to combine prints in a contemporary way. Fendi once again showed a very now collection with bright yellow and blues to highlight the greys. And a Fendi show wouldn’t be complete without some adorable graphic pieces! Jill Sander and Versace show a traditional masculine clean man with the use of muted tones and block shapes. The Versace show conjured up an image of an FBI agent, with the models mysteriously walking down in shades. The play on tailoring by Jill Sander nods to a Scandi minimalist style and keeps the look fresh and modern. With crisp and clean lines and luxurious fabrics, Jill Sander focuses on the quality of timelessness. Palm Angels and Missoni however, play with the mix of print within menswear. Missoni showed what the nerd of today would wear; burgundy, plaid trousers, workwear jackets and tie-dye jumpers. The accessories play a big part in the overall look at Palm Angels showing berets and strong 90s sunglasses. Palm Angels play on skate culture and also the androgynous approach to the men’s and women’s mix here again pushes the boundaries of what menswear is today and how it looks for Fall 2017. 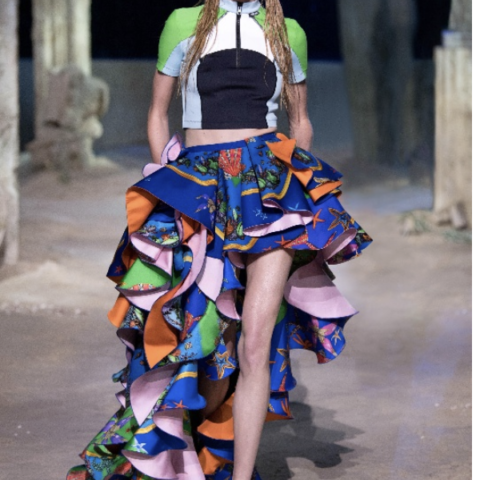 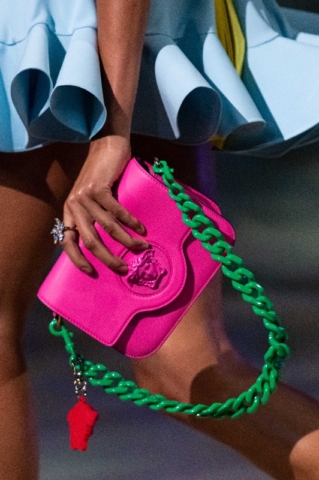