Have you ever seen a building and asked yourself “how is that this skinny building comes to be here, or even to be built like this at all?” Architects’ creativity is sometimes put to the test. And whether by constraint or choice, building a slight building remains an ordeal. Here we discover a few of the worlds skinniest building in Slightly Built

This is the narrowest house in the world. It was built by the architect Jakub Szczęsny in 2012 Warsaw, Poland. Called the Keret House, at its thinnest point it is only 92 centimetres and only 1.5 meters at its widest place. In this 9 meters tall building, it has been fitted with a bedroom, a bathroom, and a kitchen. In order to reach each floor, a ladder staircase has been included.

Although its name is ‘Keret House’ and is designed like a home, it had to be acknowledged as an “art installation” and not as a ‘living’ house, as it didn’t actually meet the Polish Building’s Code. It has however had some occupants.

Owner and writer Etgar Keret was the first occupant of the house with the house now being used in two ways. It’s open to visitors but also this space can be used writers to stay and create for a few months. Think of it as a space for artist in residence.

Whilst this house was built with truly creative architecture in mind as much as fitting this home into a tiny space between two buildings, it also had a cultural aspect.

This Warsaw house particularly holds a big historical significance with its relationship to the Second World War and the Holocaust. Keret himself said that the house was a “memorial to his family”, as his parents and family died in the Holocaust.

The Keret House may be the narrowest, but trying to fit a house in a small space is a more popular architecture problematic than we may think.

In London, the architecture studio Alma-nac, designed the Slim House. As can be seen in the video, the house is squeezed between two other homes. Being only 2.3 meters wide, the house was arranged to get as much light and space possible. Amazingly in this tight space, the house fits a living room, kitchen, bedroom, dressing, and even a bathroom with a bathtub!

The Slim House was designed to be a long-term liveable home, unlike the Keret House, that was made for nomadic artists or visitors. Therefore, the challenges the architects had to face were not the same. They had to find a creative way to design a house that would be comfortable while still being only 2.3meters wide, and they did it.

The Narrow house was designed by the Austrian architect Erwin Wurm. Inspired by his childhood home, the house is 1.3m wide and 18m long. The architect is known for his works of art around distorting scale, shape, and material of everyday objects.

Unlike the Keret House or the Slim House, this one didn’t have a “living” purpose. The house is an architectural experience, a simple piece of art, one that travels around different cites so that many can explore it.

To have a better view of the inside and understand how it is organized, here’s a video of the Narrow House.

You can also find a couple of narrow buildings in Paris. For example, this one located in Boulevard Saint Germain is not here randomly. The reason being was because in the Middle Age specifically during the 12th century, King Phillipe Auguste, decided to build a circular urban fortification system to protect the city from foreign attack.

After, from 1533 to 1690, it was decided that they would take down this fortification. As it was destroyed, gaps appeared where other buildings could be created even in tiny gaps. It’s only in the 20th century that these slight buildings began to appear between the regular-sized building already standing

It’s not the only narrow building in Paris, there is also the Agoudas Hakehilos Synagogue that was created in 1914. From pictures, it’s hard to see but, this Synagogue designed by Hector Guimard is only 5 meters wide.

Therefore, some buildings either by desire or obligation were built within a slight constraint. But in some countries, it’s not only the case of a house but the entire county’s architecture that could be described as slight.

For example in Amsterdam during the 17th century, house taxes were calculated depending on the width of the frontage of the house. Fitting buildings in the slightest space, became widespread so people would pay fewer taxes and still utilise the space to its fullest potential. Amsterdam buildings weren’t the only ones being built like this to avoid paying taxes.

It’s the same reasons buildings in Vietnam, are made in a slight way. The old quarter of Hanoi is famous for what is called the Tube Houses. They were made like this because they were taxed on how much width they took. Therefore, having a narrow house was common, to again prevent too high taxes and still house as many people as possible.

And just like those buildings, you can also find modern houses in Vietnam that are narrow. People kept the idea of a narrow architecture to build their houses.

Before the Keret House, there was the Wedge House. It is set on the island of Great Cumbrae, in Scotland. With a facade being only 1.19 m wide, the house had the narrowest facade in the world. Shaped like a slice of cheese, the house is very narrow in the front but get’s wider in the back.

Did you enjoy this article on slight buildings? Why not read more about architecture? Find Around the World in Five Houses or A New Appreciation for Brutalism’s Unadorned Concrete Monsters here. 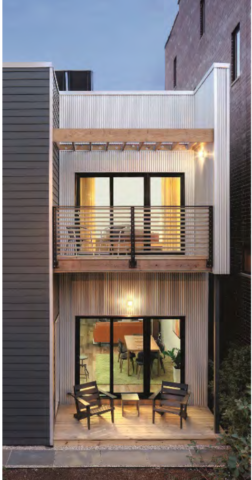