Perfume is one of the most global of cosmetics, with many of us having at least one at home. Some people even consider perfume as an accessory, something they wear somehow coordinated with their outfit or even mood. But there is one thing that we often forget when we are used to wearing scent; the intensity of the odour and how it may well effect others. This was actually a problem in 1990s Japan. In this country people’s own personal space is sacrosanct but by wearing fragrance it could be perceived you were invading someone’s personal space. But thanks to an amazing man and his original idea, the world of fragrance was opened up to many in Japan. Find out more in Smell the Water.

Let’s start with an introduction to an amazing man; Mr Issey Miyake. Born in 1938 in Japan living during the bombing of Hiroshima in 1945, despite this traumatising event that happened when he was only 7, the young Miyake didn’t let it change his life.

He started to study graphic design at Tama Art University in Tokyo. Then, he participated in a fashion competition at Tokyo’s Bunka Fashion College. However, he didn’t win, so, he decided to go to France to study at the fashion school the Chambre Syndicale de la Couture Parisienne. There, he improved his pattern-making and as well as his sewing skills.

From there he went to New York to take classes in English at Columbia University. And if that wasn’t enough, after that, he returned to Japan and founded the Miyake Design Studio. There, he started to make designer clothes for women and then men.

His clothes were part of the Japanese invasion into clothing in the 1980’s that truly influenced he world of fashion forever. He became famed also for his pleating method, and it was these works that inspired him to create his secondary clothing range “Pleats Please”.

In 1992, Issey Miyake was already a fashion legend, but he had an original idea in mind. Having been asked to create his first scent he collaborated with the perfumer Jacques Cavallier to create a perfume that would smell like a drop of water on a woman’s skin. A concept seemingly simple to us now but revolutionary then. And why? Because is japan this is a scent that could work and not be seen as invasive.

In reply to this uncommon request, Mr Cavallier used Calone, a synthetic compound that smelt like the sea. This was the beginning of a whole new subsection of perfumes known going forward as, the aquatic’s.

The fragrance for this brand was named “L’eau d’Issey”, complete with the scent of the sea, you could almost smell the salt of the water with the woman’s skin symbolised by touches of flowers in the fragrance. This perfume, so successful, it spawned a men’s edition, l’Eau d’Issey pour Homme, containing touches of wood and spices, both of which have gone on to become classics in their field and groundbreaking in their time, and both are still greatly loved, partly because of the long-lasting, Calone ‘note’.

From this most unusual beginning led to enormous success and so comes a new story from the brand.

Let’s imagine you are on a tiny boat, the light but still strong smell of salted water enters your nose, you are only surrounded by the beautiful blue of the ocean. You are the master of your destination and decide to stop on a small island, looking like a forest. As you approach the island, the smell of wood tickles your nostrils. But, this is not just some wood, you recognise that smell, the Cedarwood. Such a strong tree, with such a light scent, growing in the middle of the ocean, is it even possible? Aren’t you dreaming? Yes, you were, when you finally wake up from this beautiful dream, you find out what caused it; the new perfume from Issey Miyake, l’Eau d’Issey pour Homme: Eau & Cèdre, sitting right by your bed.

After a few minutes of thinking about that dream, you turn over in your bed, you look at your wife. You find her beautiful, as always. It is her birthday today, and since you didn’t forget it this year and are well prepared, you have her gift next to you. She is asleep and has a little smile on her lips and you don’t want to wake her up. But, as if she felt your glance on her, she slowly opens her eyes and a bigger smile is drawing on her face. You would love to say “Happy Birthday” to her right now, but there is a question that you want to ask her before… What was she dreaming of to smile while sleeping?

And so, she starts to tell you her dream. She was on a cruise, on a calm sea, rocked by the waves, enjoying the salty smell of the water. At some point, the cruise ship makes a stop on a beautiful little island full of tiny pinkish flowers, her favourite flowers, the magnolia.

Once she is done describing her dream, you look at your present box and wonder, did your wife really dreamt about your gift, about the new perfume by Issey Miyake; L’Eau d’Issey: Eau & Magnolia? You don’t have time to figure this out, she is now waiting for you to say something, so you tell her “Happy Birthday” and offer her this box that you took care to envelop in a nice gift wrap. She opens it up and as she sees the beautiful glass bottle and its pink-coloured wooden cap, a large smile crosses her face and she throws herself around your neck and says “Thank you !”.

If you would like to know more about Issey Miyake’s Eau & Magnolia perfume, or if you want to know where you could buy it, click here.

For more information on Issey Miyake’s Eau & Cèdre perfume, or if you want to know where you could buy it, click here.

If you enjoyed Smell the Water, you may also like For the Love of... 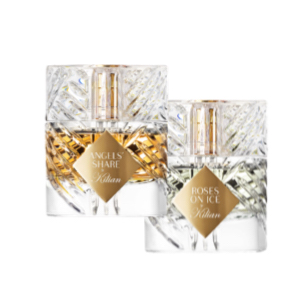