“Yo-ho-ho and a bottle of rum!” The famous seafaring ditty sung by the gregarious pirates in Robert Louis Stevenson’s classic novel, Treasure Island, reflects the fun but outlandish nature of this silky spirit. For years, rum has held onto these violent pirate associations, but Equiano brings a sophisticated side to the drink. Read more here in our piece Sugar, Spice, and Everything Nice.

Originally published in 1883, Treasure Island tells the story of Jim Hawkins and his search for the buried treasure of an evil pirate, Captain Flint, alongside a Squire, a Doctor, a one-legged cook named Long John Silver, and a gaggle of pirates.

The pirates often stay up late enjoying drunken revelries organised around drinking rum, getting into all sorts of trouble and often losing control. The association of the spirit with the wild lawlessness of piracy reflects the Victorian notions at the time of the immorality of alcohol, where losing your inhibitions was not seen as proper.

Another earlier classic, also based on seafaring and rebellion, is the older novel, Robinson Crusoe by Daniel Defoe. A rebellious Crusoe defies his parents and goes to sea, battling several storms along the way and eventually finding himself in Brazil, where he becomes the owner of a sugar plantation.

On a trip from the plantation to Africa, he and the others are shipwrecked. Crusoe is thrown onto an island, discovering he is the sole survivor of the wreck, and lives on the island for fifteen years.

Though a somewhat problematic read in today’s times with the issues surrounding race and slavery, the novel has remained a classic. It too features rum, this time as more of a medicine. Crusoe has a terrible fever and temper and treats himself using rum and tobacco, no doubt salvaged from the wreck as commonplace items being traded at the time.

Crusoe soaks tobacco in rum and then chews it, drinking the rum before he goes to sleep that night. He wakes up two days later heralding he is ‘exceedingly refreshed‘ and a bit later: ‘my spirits lively and cheerful.’ Rum is seen here as a saviour, rather than a frivolity.

Even in modern times, rum continues to be associated with rebelliousness and violence. The novel Rum Punch by Elmore Leonard was adapted into a film by none other than Quentin Tarantino, re-naming the story as Jackie Brown. The plot involves illegal arms dealing and is full to brimming with rebellious characters.

Despite these associations, or maybe because of them, new brand Equiano has decided to deliver a sophisticated product that will give rum a smoother sail from now on.

The rum is truly authentic, World’s First African & Caribbean rum, Equiano. This rum contains rich and deep flavours coming from the barrels that give tropical nature to the Limited batch liquid. With no added sugar, spice or flavourings 43%, 70cl, it is embellished with a unique twist: the rum is a blend from both Africa and the Caribbean, the first of its kind.

The distilleries are Gray’s in Mauritius and Foursquare in Barbados, the rich and deep flavours coming from the ex-cognac and ex-bourbon casks that the rum tropically matures in.

On the nose, it delivers tropical warmth alongside notes of dried fruits such as raisins combined with sweet toffee, butterscotch and caramel. It finishes on a medium sweet note with touches of oak, anise, sweet pepper and a hint of bitter orange peel.

However, it is not just the blend and the taste that make Equiano’s rum so exquisite; the namesake comes from freedom fighter Olaudah Equiano.

Born in 1745, Equiano was kidnapped and sold into slavery where he was taken to the Caribbean. He eventually went to the UK where he saved forty pounds by selling rum, and bought his freedom. The rum can be seen to mimic this journey, starting in Africa, travelling to the Caribbean, and then to the UK.

The makers at Equiano were inspired by his journey and everything he fought for. They saw similarities in their own beliefs and values, so much so that they have pledged to support modern day slavery today.

Two dollars from every bottle sold through the website is going towards the Equiano grant-giving fund. The receiver of the grant for 2021 is Anti-Slavery International, who fight contemporary forms of slavery. They investigate and expose current cases, campaign for its eradication, support local initiatives and press for more effective implementation of national and international laws against slavery. Founded in 1839, it is the oldest international human rights organisation.

Equiano is not only a unique and amazing tasting rum, but you would also be donating to an amazing cause. You can buy your bottle at equianorum.com .

If you enjoyed Sugar, Spice, and Everything Nice, why not read A Sip of Perfume here. 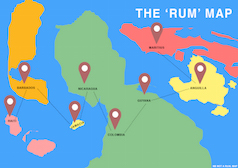