We know it goes on, we hear about it all the time, and we think about it when we separate our rubbish and recycle. But how often do we actually see the environmental damage caused, often, illegally in our rain forests? our ecological war zones? Not really close-up and personal, therefore creating a void between what we know and see. Award-winning artist Richard Mosse will unveil a major new installation, presented by 180 Studios at 180 The Strand, opening on 12 October 2022. Find out more in View The Crimes

All images and stills from broken Spectre, 2022, five-channel 4K video with 20.4 surround sound courtesy of the artist, Jack Shainman Gallery, New York and carlier | gebauer, Berlin/Madrid.© Richard Mosse Co-commissioned by the National Gallery of Victoria, VIA ArtFund, the Westridge Foundation and Serpentine Gallerie.

Filmed in remote parts of the Brazilian Amazon, the immersive video installation Broken Spectre is the result of three years of careful documentation of environmental crimes using a range of scientific imaging technologies. Seeking to overcome the inherent challenges of representing climate change in order to make visible the world’s most crucial yet ignored ecological warzone, Broken Spectre is Mosse’s most ambitious project to date.

Mosse has documented some of the most significant humanitarian and environmental crises of our time. He has mapped the journeys of refugees and their camps across Europe, the Middle East, and North Africa, and documented an ongoing cycle of conflict in the eastern Democratic Republic of Congo. Combining reportage and contemporary art photography, he creates images of striking and unsettling beauty that push the boundaries of his craft to try and convey the scale and tragedy of events that are complex and opaque, often working critically with military-grade imaging technology and using camera, film, and sound in unconventional ways.

A selection of the artist’s photographs from the project will be displayed alongside the installation, including large-scale photographs that have not been exhibited in the UK before.

In 2017 Mosse was awarded the Prix Pictet for series Heat Maps, panoramas of refugee camps made using a military-grade thermographic camera, designed to detect body heat and classified as a weapon under international law. In 2013 he represented Ireland at the Venice Biennale with The Enclave, an immersive six-channel video installation capturing war zones in Eastern Congo that utilised 16mm infrared film, shooting a discontinued military surveillance film developed to detect camouflage, producing a landscape that glowed a disquieting pink.

Broken Spectre was made in collaboration with cinematographer Trevor Tweeten and composer Ben Frost.

These works are important not just to record what is happening to our world, but also to bring the reality of it directly to our eyes, this way we don’t live with the void between knowing and seeing. 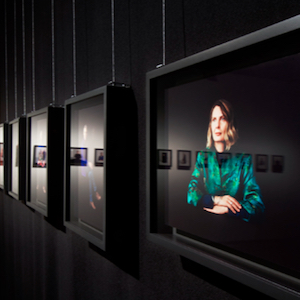